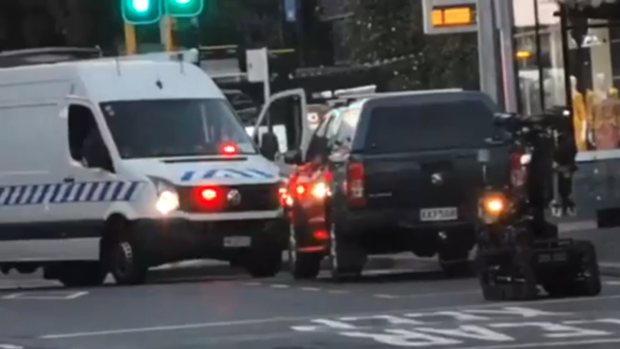 Police have cordoned off a second part of Auckland's city centre this evening.

Armed police and ambulances blocked a section of Victoria St between Albert and Queen Streets at about 8.15pm and prevented people from exiting buildings.

It came not long after two mysterious backpacks which were left near Britomart Train Station were blown up by the Defence Force.

A witness at Victoria St said there were armed police blocking the road.

"There were a lot of cops, I counted about seven cop cars and two ambulances. The police officers were coming out of their cars and telling people to stay out of that area," said the man who didn't want to be named.

The incident was over in about 15 minutes and the road reopened without any explanation as to what happened.

"The whole thing didn't last very long, they just reopened the road and drove off."

"When I asked them what was going on they just told me to go away".

Earlier, armed police were at Auckland's Britomart Train Station where a controlled explosion has taken place following the discovery of two abandoned backpacks.

Police were called to a section of Galway St where the backpacks were left unattended.

Two explosions have just gone off at Britomart

Members of the public were held back behind cordons while the bomb disposal robot was sent in to get a closer look at them. A controlled explosion was heard soon after.

A police spokesman confirmed armed officers were at the station, which has been blocked off to motorists.

The spokesman said Britomart Train Station itself had not been evacuated and there has not been any effect on the train timetable.

A small cordon has been put in place around the immediate area on Galway St as a precaution.

There is no further information available at this stage.