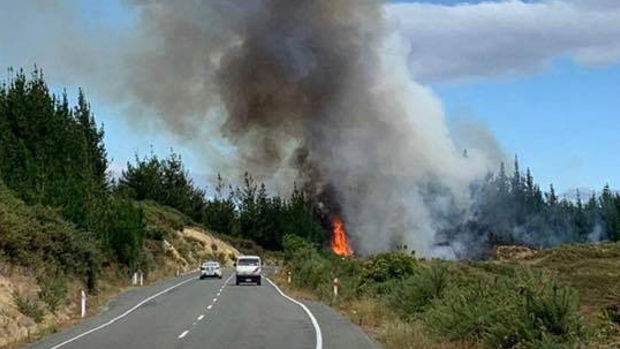 Residents have been told to evacuate immediately as a new fire spreads rapidly in the Tasman region.

A Fire and Emergency NZ spokeswoman said 16 fire appliances were at the scene of the fire near the Moutere Highway. Three helicopters and two bulldozers were also called in to fight the blaze.

The fire is currently 3-4 hectares, spreading rapidly, and there are large areas of smoke spread.

Police were assisting with the evacuation of houses on the Redwood Valley side of the highway.

Residents were advised to go to the Tasman-Marlborough Fire Area Facebook page for updates.

Pictures posted on social media show a section of forest engulfed in large flames right next to the highway.

Facebook user Jesse Whittaker said the fire was moving over the grass towards the trees.

The new fire, which fire services were alerted to around 1.30pm, is north of Pigeon Valley where huge wildfires began three weeks ago. It is outside of the 2300-hectare zone where the original fire burned.

A state of emergency had been lifted but authorities had warned the fire risk remained extreme "and a single spark could create a large fire".

Police told residents living on a stretch of Moutere Highway to evacuate from their properties.

People on property between Old Coach Road and Maisey Road have been told to leave immediately.

Police are following up with evacuation patrols.

In addition, anyone in the area who was feeling unsafe or threatened was advised to self-evacuate as a precaution.

This morning the state of emergency in the Nelson region was lifted, with Civil Defence confident the fire that has been burning in Pigeon Valley for three weeks was "contained and under control".

This morning, Mayor Richard Kempthorne confirmed a decision had been made to allow the state of emergency to expire.

"There has been a huge effort from all agencies involved, to ensure the threat to people, animals and property is alleviated," Kempthorne said.

Civil Defence controller Roger Ball said he was confident that the situation had been contained and was under control based on the efforts of Fire and Emergency NZ personnel.

However Fire and Emergency NZ received multiple calls this afternoon about the new fire near the Moutere Highway, the first at 1.18pm.

As at 3pm, MetService was recording westerly winds at 30km/h with wind gusts up to 41km/h. The temperature was just over 23C.

The wind direction is expected to shift to a southwest direction this evening.