Federated Farmers dairy industry chairman Andrew Hoggard says he is disappointed that a SAFE advertisement in the UK aims at smearing the NZ dairy industry.

"Pretty disappointed that they target the entire industry and smeared us all with the same brush based on the actions of a small number."

The industry was worth nearly $9 billion to the New Zealand economy in the past financial year and the UK accounted for about $26 million of dairy exports.

Under the header "New Zealand dairy contaminated with cruelty" the advertisement ran in the Saturday edition. 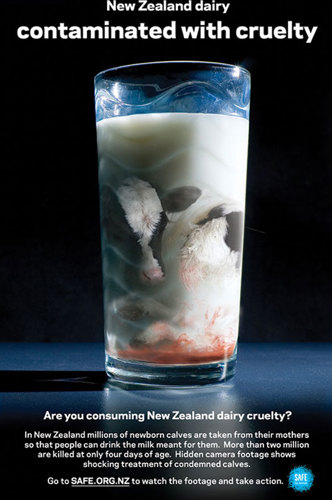 The print ad was part of a $10,000-plus advertising campaign which also included two weeks of online advertising.

A recent investigation by Farmwatch and SAFE uncovered abuse in the dairy industry, including calves being left for hours in the sun, and being kicked and beaten by workers at a slaughterhouse before being killed.

Hidden camera footage was released along with the investigation findings.

The Guardian ad showed a picture of a tall glass of milk swirling with calves, blood and milk, and poses readers the question: "Are you consuming New Zealand dairy cruelty?"

Mr Hoggard said: "To do this only days after the Ministry for Primary Industries and seven industry bodies, including Federated Farmers, announced they would work together to ensure that New Zealand's high standard of Animal Welfare codes are adhered to by the full 100 per cent of industry participants makes it clear that SAFE's campaign is not about highlighting any issues, but instead trying to hurt our industry.

"What has come through loud and clear this week is that most people understand that this is a very small minority and that bobby calves are a reality of dairy farming," he said.

"I think most New Zealanders will join us in being extremely disappointed about SAFE's UK campaign and the damage it is looking to do to an industry that is the backbone of the New Zealand economy and the livelihood of our country's 11,500 dairy farmers and thousands more who work in and support the industry."

SAFE executive director Hans Kriek said the group launched the campaign because it had learned from the past that the Government and farming industry were slow to act when animal cruelty was exposed.

He said SAFE might be seen as disloyal but added: "we obviously don't have the ability to destroy the New Zealand dairy industry".