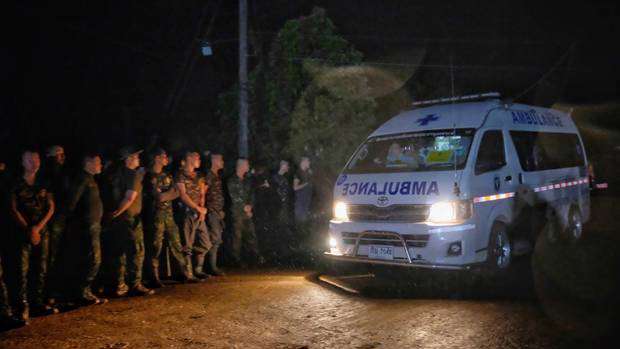 Four players from the missing Thai football team trapped inside a flooded cave were brought out overnight after divers executed a carefully constructed rescue mission while racing against the clock.

Thirty-five emergency doctors were on standby as the "exhausted" boys were flown by military helicopters and ambulances to Chiang Rai Prachanukroh hospital.

The operation was suspended just before 2am Monday (New Zealand time) because rescuers had used all available oxygen supplies.

The other eight players and their coach remain underground and will hopefully be rescued today. Divers are expected to re-enter the caves anytime between noon and 10pm Monday New Zealand time — but only if conditions are suitable.

He said the rescued boys were in "perfect" health, despite earlier reports that one was being "closely monitored", calling the rescue "our masterpiece work".

More than 90 international divers and 40 Thai divers have taken part in the daring rescue.

The first boy to emerge was identified by local media as Mongkol Boonpium, 13, and the second as Prachuck Sutham, 14, but the governor would not confirm who had been rescued.

He said a doctor had determined the order, with the strongest leaving first.

He said: "After 16 days of waiting today we finally see the faces of the Wild Boars. Today is the best situation that allow us to carry out the evacuation operation. All of the four boys have been sent to the hospital and all of them are safe."

The first rescues were confirmed just after midnight, NZ time.

The four boys were on stretchers when they emerged from the cave. They’re now in hospital, some via chopper, some via road ambulance. Rescue mission to resume after masks/gear checked over and tanks replenished #tennews #thamluangcave #thaicaverescue

At a press conference about 2am NZ time, Osatanakorn said "four have been [brought] out from the cave site, four have been rescued. We consider that a great success."

"Our job is not completely done," Osatanakorn said. "We will have to do the next mission as successfully as the one we did today. The rest of the kids are in the same spot."

"Air tanks and systems have to be put in place again," he said. "I can't tell you exact timing of the next operation but I can say it will be more than 10 hours to 20 hours. It will not be more than 20 hours. I have to check all factors are stable. The operation then will be carried out.

"The second boy came out between ten and 20 minutes after that.

"We transferred the first two to the hospital immediately.

"For the rest of the boys, the evacuation operation will resume when the conditions are suitable. The reason why we have to wait before we can resume the mission because we have to start the whole operation again.

"The most important thing is that the mission will resume when we have the best conditions possible, as we did today.

"We will restart the operation when we are confident that the conditions are suitable."

The boys and their coach have spent 16 days trapped in the complex cave network below the Mae Sai mountains, in Chiang Rai, northern Thailand, after wandering in to explore.