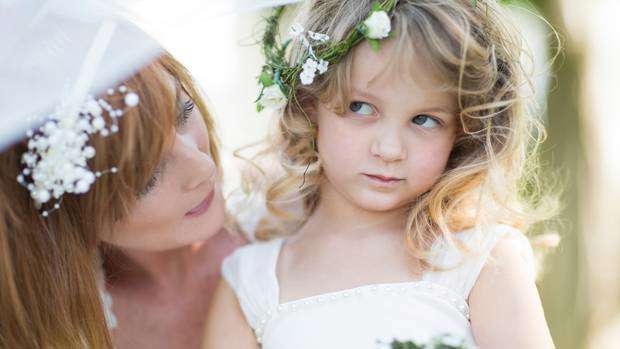 A bride-to-be has been slammed as a "terrible human being" after revealing that she wants her groom’s daughter to be banned from their big day.

In a rant on Facebook, the unnamed woman asked how she could tell her fiancé she doesn't want his three-year-old tot - who she refers to as a "mistake" and a "crotch goblin" - at the wedding ceremony.

The woman's post read: "How do I tell my fiancé I don't want his daughter at our wedding? I put 'no kids' on the invites so I thought he'd get the point, but he keeps mentioning her being there?"

She also added that she is "marrying him not his crotch goblin".

"Edit cause people keep asking me the same dumb a** questions," the rant continued. "She's three. I am marrying him not his crotch goblin. That's his mistake, not mine.

"I don't want her there because she's needy AF and makes everything about her AND I said no f***ing kids!

"If you don't have [anything] nice to say or any advice then SCROLL ON!" she added.

The bride’s "abhorrent" question was quickly met with criticism and outrage online after being shared to a 'wedding shaming Facebook' group and later on Reddit.

One shocked user wrote in response: "I'm pretty childfree and I think this is absolutely abhorrent.

"If you don't want to be in a partner’s kid's life, don't be with that person at all! When I was single I had a strict no dating parent’s policy for this reason."

"She's three ... of COURSE she makes everything about her ... that's all she knows," another commenter added. "This marriage (if it happens) is gonna end quick or last way too long and be horrible the entire time."

"OMG please let this not be for real!" another person commented. "How does she talk about her fiance's kid like that? OMG, this makes me want to cry."

Others questioned whether the woman should be marrying someone with kids at all.

"Lady, when you marry a man, you marry his family," one user said. "The fact that you refer to his daughter as a 'crotch goblin' is a major red flag and he needs to dump your sorry a**."

"There is a really good reason no one has anything nice to say because you are a terrible human being,” another person wrote.

READ MORE: This bride's list of demands for her bridesmaids are outrageous!

"Also, if him having a child was going to that much a problem why still be in the relationship?

"He's still going to raise and love his daughter so either you grow up and be a stepmother as that's what comes with the marriage or break it off if you can't commit.

Others suggested that the groom "cancel the wedding ASAP", with one person noting that the bride would likely be the "worst stepmother ever" if she did marry the young girl’s father.