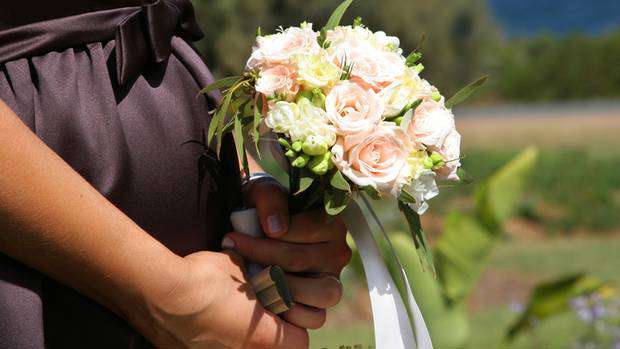 A furious bride has received some serious backlash online after claiming her pregnant bridesmaid should pay her back $58,000 for "upstaging" her on her wedding day.

The anonymous Reddit user, who used the alias "Ignoredbride" told of how her pal "Anna" took the limelight in many ways and caused her to leave her own reception in tears.

She accused her now ex-friend of getting pregnant without thinking how it would affect the bride in the lead up to her wedding, which had been in the planning for three years.

She also noted that Anna was "eclipsing everyone around her" due to her "vibrant personality" and hot husband.

The bride claimed the man is "very tall and incredibly attractive, which drew a lot of attention".

Another point that the bride noted is that she never wanted the husband there in the first place: "She brought her new husband as her plus one (who I never met prior) and convinced one of the other bridesmaids to take her friend as hers (when she KNEW we didn't like him)."

Because of these reasons, the bride felt all eyes were on Anna, when they should have been on her, and she now can't even look at the pictures of her big day without crying.

She also claims that the married 25-year-old pregnant bride was basically a "teen pregnancy" and frowned upon by her husbands family.

"She was hugely pregnant and didn't refrain from showing it off. We're both fairly young (25) and in my husband's culture, getting pregnant before late 20s/30s, married or not, is basically a teenage pregnancy and drew ATTENTION."

The bride believed she is owed a "do-over" wedding and that Anna should pay for her to do so. 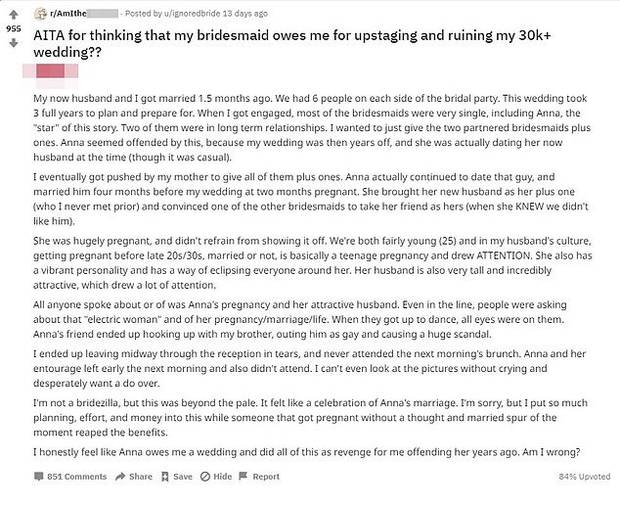 However, her post didn't go down well with Reddit users, who slammed the woman claiming she is in fact just another "bridezilla".

"'I am not a bridezilla' is what every bridezilla says always," one Reddit user commented.

Another added: "It's not Anna's fault she decided to live her life. Your planning spanned three years without any consideration OR expectation of possible changes within the people involved. HELLO? Time doesn't stand still just for you. That alone shows how self-centred you are. You are 100 per cent a bridezilla."

One joked: "I particularly liked the part where she called Anna very single then proceeded to say she was in a casual relationship with the person she married. Clearly, she was in a pretty serious relationship."

Another wrote: "It's like she resents Anna for not being frozen in time from the moment of OP's engagement to her wedding three years later.

"Like, at the time she was just dating the guy in a very single way, so HOW DARE SHE reach relationships milestones at a faster rate than OP's three-year engagement?

"Also, Anna was supposed to live her life by the cultural rules of her friend's groom's family. Meanwhile, OP didn't think it necessary to even meet Anna's husband and the father of her child."

Another mentioned they felt the bride was simply jealous of her ex-pal: "This whole post reeks of jealousy and insecurity and is just sad all around. I'm not a Bridezilla but my bridesmaid's happiness ruined my day and she owes me a wedding. How do these people survive day to day in the real world is my question lol."