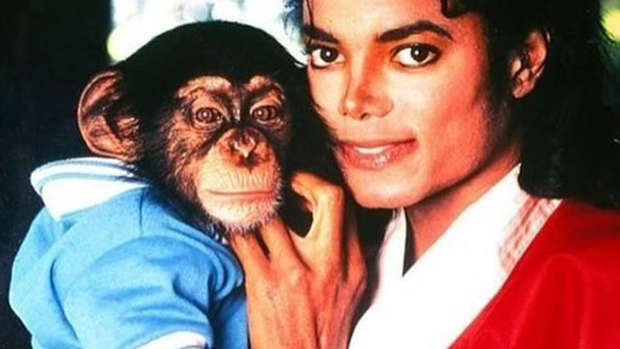 With no public to please, he gets up when he wants nowadays, taking a leisurely stroll around his grounds with companions who haven’t a clue that he used to be a superstar.

There are no fans to see the toll the years have taken — the grey beard on his chin and the small bald spot just above his brow. Rarely has a showbusiness legend managed to slip so easily into blissful obscurity. His greatest exertion nowadays? The odd bit of painting.

When, a few weeks ago, five abstract works by an artist known as Bubbles sold for nearly £3,000 at an art gallery in Miami, many were shocked to discover the painter was Bubbles of Michael Jackson fame. Contrary to rumours, the ape wasn’t long dead, preserved in formaldehyde by a German doctor.

Eight years after Jackson’s death and nearly three decades after the ‘King of Pop’ parted company with his once inseparable companion, the world’s most famous chimpanzee is very much alive and well, living out of the public gaze in genteel retirement in Florida.

Nobody has asked him to do the Moonwalk (Jackson’s famous backwards shuffle) for decades. Gone are the absurd showbiz trappings — a private bathroom, a wardrobe of glittering outfits, walk-on roles in pop videos and a place at the dining table with the Jackson family.

But the cuddly primate, who was once dressed in identical outfits to the superstar, ‘is now just a normal chimp’, says Patti Ragan, the sanctuary’s founder.

‘He has a chimp life,’ she says. ‘He loves to paint but, more than that, he loves to play with the other chimps. He particularly loves water — he adores playing with the hose or with the sprinklers in summer.’ Indeed, the impish ape often likes to take mouthfuls of water to spit at visitors.

Aged 34 and weighing 12½st, Bubbles is the dominant male in a group of seven chimps — three males and four females. His best friend, Ripley, grooms Bubbles’s fur and is his ally whenever squabbles break out.

The group sleep in an eight-room ‘night-house’ on blankets, pine needles and hay. Their diet is fruit and vegetables (Bubbles likes mangoes best) as well as protein biscuits. Gone are the days when he had access to the Jackson family freezer and gorged himself on Haagen-Dazs ice cream.