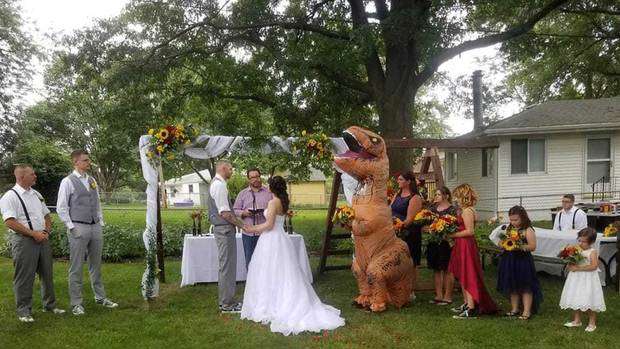 A generous bride who gave her bridesmaids' free reign on their dress choices never guessed her sister and maid of honour would make her way down the aisle in a T-Rex costume.

Determined that her bridal party would feel comfortable in their outfits on the big day, Deanna Adams from Nebraska told them they could wear whatever they liked.

Adam's sister and maid of honour, Christina, took the offer to the extreme and opted to wear an enormous, inflatable Tyrannosaurus Rex costume.

"'I was trying to think of something that I would be willing to wear more than once and thought to myself, 'Well, she did say anything, and if I'm spending more than $50, I want it to be a dinosaur costume, because they're fantastic and I've always wanted one," Christina told FEMAIL.

"I sent her a text so that she could have a laugh - surprisingly she was okay with it!"

Christina shared a photo from the big day on Facebook, which has since garnered more than 34,000 shares and 17,000 comments.

"When you're maid of honour and told you can wear anything you choose ... I regret nothing," she captioned the picture.

Social media users found the outfit hilarious and praised the bride for being such a good sport about it.

"Hahahaha but really what is a better outfit?" asked one.

"I would ask all of my bridesmaids to wear this! It's amazing," wrote another.

Responding to one negative comment, bride Deanna assured the critic she loved her sister's costume.

"My sister is awesome and I genuinely was not kidding when I said she could wear whatever she wanted," she wrote in response.

"It's not a joke, it's a giant middle finger at spending thousands of dollars and putting ungodly amounts of pressure on ourselves just to please a bunch of people who, in the end, only want free food and drinks."