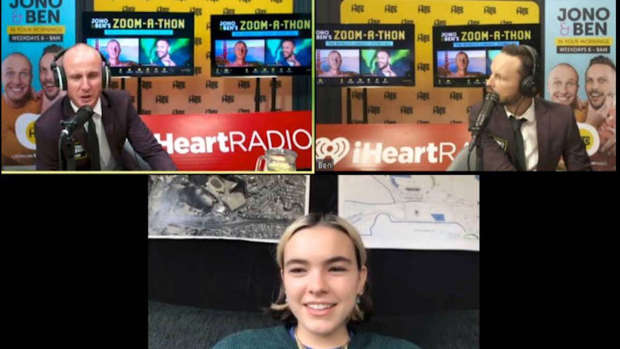 Pop sensation Benee, 20, has been keeping busy recording in the studio throughout lockdown.

She shared a bit about her recording process with Jono and Ben on the Zoom-A-Thon.

Ben asked the pop star if she was ever fully happy with a song she's made.

"It'll happen afterwards," Benee said. "I'll release a song - it happened with my song Glitter recently - there was one line that could have sounded so much better.

"I am very picky with my current stuff, it's gotta be perfect."

Jono and Ben asked her if she makes up songs as she goes.

"Kind of, because in isolation I've been able to make stuff in my room. I brought in a song I made last week and Josh my producer made it sound good."

Benee was meant to be travelling through the US, but had to cancel the trip due to lockdown.

"If I was there I probably wouldn't have been producing new material. I'm glad I'm here now."

The star revealed the weirdest thing she's written a song about.

"I wrote one yesterday about a snail and it's called Snail," she told Jono and Ben.

"I started to write it about me being a snail but then we were like, I've got to make this relatable. So I was like, I'm like a snail."

Jono asked if she preferred to be called Benee or to go by her real name Stella.

"You do whatever you feel," the star told him.

"I feel like we're better mates if I say Stella," he said.

First name basis with @beneemusic baby! Or is Jono just getting too personal? 😂