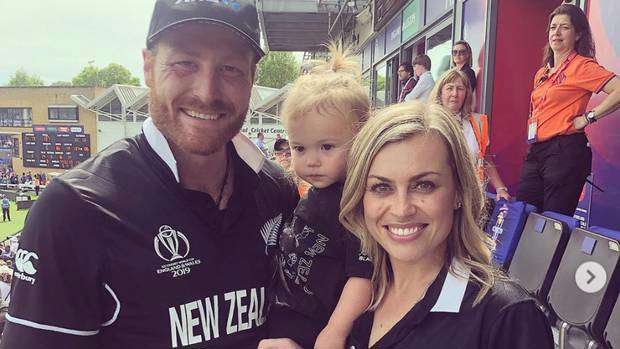 Laura McGoldrick has praised the Black Caps courage in defeat and congratulated England on their stunning Cricket World Cup victory after watching on nervously from the stands at Lords yesterday.

The popular broadcaster and wife of New Zealand opening batsman Martin Guptill rode a rollercoaster of emotions throughout the tournament decider, but despite the loss said she couldn't be more proud of the team's performance and humility.

"I'm fine, life has to go on," she said in an interview with The Chris Evans Breakfast Show on Virgin Radio in London.

"Regardless of the result, it was one of the greatest sporting events that I'll ever see in my lifetime. It was so exciting.

What a squad! Not the result we wanted today, but what an occasion! So grateful to be here 🖤 #NZvAUS #backtheblackcaps

"Maybe England needed it more than we did, I'm not sure, but we're a good bunch of people and we played some incredible cricket over the last six-seven weeks.

"They deserved to be in the final and I'm sad that it came down to a boundary count, as opposed to what happened in the moment.

"But it is what it is and you can't change that unfortunately and credit to England, they played very well as well and congratulations to you guys. It must be very nice to be World Champions this morning."

McGoldrick joked she was being physically ill due to the tension, as Guptill prepared to face his first delivery during the Super Over, after both teams had drawn level on 241 runs at the end of normal play. The Kiwis eventually lost because they had scored fewer boundaries than England.

"Just vomiting in the corner, I think is probably what I [was] doing. It was pretty scary," she laughed. "No, I don't know what I was doing – just holding on very tightly to my child (baby daughter Harley).

"It's just the beauty of sport and when you're invested in it like obviously I am, you've just got to ride the wave and try and enjoy it and soak it up."

Evans explained he had also taken his son to the game, and McGoldrick agreed the occasion would never be forgotten by young cricket fans and all those lucky enough to be in attendance.

"The most important thing is to see how the teams win and lose for your children going forward," she said.

"England were great winners on the day and New Zealand were good losers. Everyone played their part and it's so great that children get to watch and be a part of that.

"It's nice that they can be a part of those big moments that they'll remember for the rest of their lives."

Evans went on to praise Guptill and the New Zealand side's bravery and class in defeat telling McGoldrick: "Teams don't lose with more class than your husband and his teammates lost with yesterday. It was an absolute lesson to everybody on how to hold your head up high and how to act as a human being."

McGoldrick agreed all Kiwis could be proud of the way the Black Caps played throughout the entire tournament and predicted brighter things were still to come for the national game.

"Our boys have done us immensely proud over the past six-seven weeks, and they left it all out there," she said. "And that's the only thing that you can ever ask for – is that you go out there and give it your all. That's exactly what they did and everyone could see that.

"It's a sign of things to come for New Zealand cricket and the Black Caps, we're only going to get better because of this and I'm incredibly proud."

Evans wrapped things up by reassuring McGoldrick that sporting success was on the horizon for New Zealand, saying: "As far as your countrymen and women are concerned, you've got a Rugby World Cup [coming up] – you're bound to win that."

"Oh no, we're definitely going to win that, don't worry about that," she replied.