Not only did Princess Eugenie get her royal wedding thunder stolen by Prince Harry and Meghan Markle’s baby announcement, but Buckingham Palace has seemingly made matters worse by mixing up the newlywed on her wedding souvenirs.

A post from the Buckingham Royal Instagram account announcing the sale of commemorative mugs celebrating the marriage of Princess Eugenie and Jack Brooksbank mistakenly referred to Eugenie’s older sister Princess Beatrice as the bride. 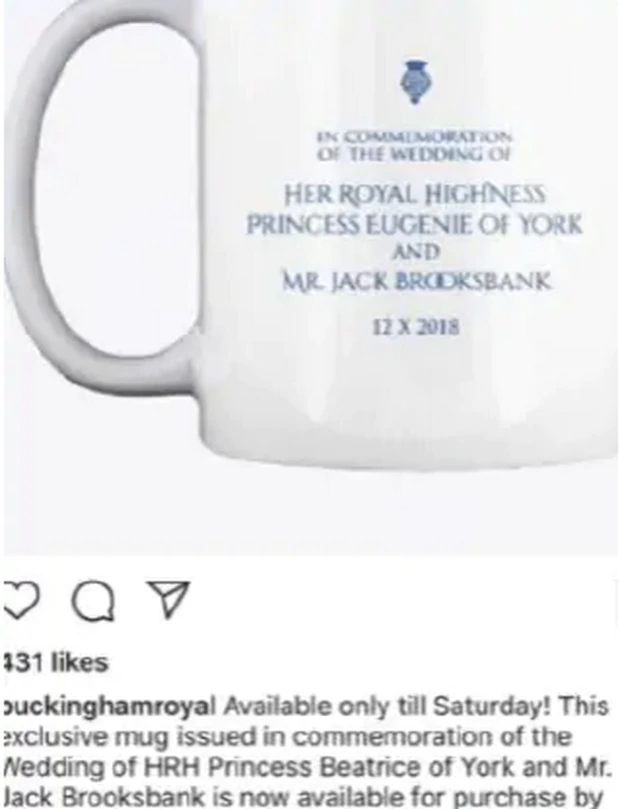 "This exclusive mug issued in commemoration of the wedding of HRH Princess Beatrice of York and Mr Jack Brooksbank is now available for purchase by following the link in the description," the caption said.

Princess Eugenie is walked down the aisle by her Father @hrhthedukeofyork. Today, Her Royal Highness was also supported by her mother, Sarah, Duchess of York and her sister, Princess Beatrice, who was the Maid of Honour. #RoyalWedding

The post was quickly removed but will have no doubt caused quite a bit of embarrassment.

However, it the gaffe may have not been as bad as it seems. as it appears the Buckingham Royal account is thankfully not an official account. Although it is still quite awkward that even a fan of the royals can't tell the two princesses apart ...

Princess Beatrice was Eugenie’s bridesmaid during her Windsor Castle wedding.

Eugenie was allegedly already upset that the Duke and Duchess of Sussex announced their royal baby news on her big day, while her mother, Sarah, Duchess of York was furious that they stole attention from her daughter.

Hopefully, this new indiscretion won’t cause the Princess too much distress.