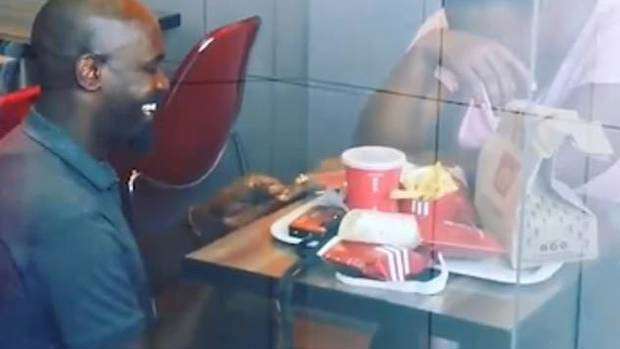 A proposal at a KFC in South Africa has gone viral on social media after the fast-food restaurant shared the adorable moment captured on film.

After being provided with a video of a man kneeling and presenting a ring to his partner halfway through their meal, KFC South Africa shared it on Twitter — along with asking others for help finding the couple.

The post was retweeted more than 17,000 times, and the hashtag #KFCProposal started trending.

Mzansi please help us find this beautiful couple, re batla ho ba blesser 😊 DM us any leads, there might be a Finger Lickin' Good surprise in it for you too. Batho ba Vaal re thuseng! We love love 😍❤️ #KFCProposal pic.twitter.com/6bj89dtj4j

KFC's hunt proved successful, as the couple were soon identified as Bhut' Hector and Nonhlanhla within hours of posting.

"We've found the beautiful couple, and looks like we're having a #StreetwiseWedding y'all.

But the happiness didn't end there, as hundreds started offering the couple help with their wedding and honeymoon.

"I want to offer my performance at the wedding for free... I love love," tweeted popular singer-songwriter Zakes Bantwini.

"These honeymoon destinations look far. Someone needs to drive them there. We got you," tweeted South Africa's official Audi account.

"We would love to make their union even more special by offering them a two-page spread in our magazine so they can tell their beautiful love story!" tweeted DRUM magazine.

We would be delighted to supply one of our gorgeous wedding gowns to the bride to the value of R30 000.

@KFCSA can u let them know I’d like to sponsor a couples massage day for them at Fairlawns. Every girl deserves a massage before her big day. Please ne

We would love to feature #KFCProposal couple on the cover of our next issue @KFCSA .

Brands including Coca-Cola, Audi, and Sony pledged gifts, and it even went as far as them being offered a free house (although whether this will come through is yet to be confirmed).

Kateka Malobola, who filmed the proposal and originally shared it on social media, revealed what happened when he shared the heartwarming moment.

"I took the video and sent it to a group that I've got on my WhatsApp to say 'check this out!' and I put it on Facebook and put it on Instagram, and then boom!" he said in a follow-up video.

Speaking to Sowetan Live, the couple said they were overwhelmed by the support.

The couple officially married in 2012, but he proposed again since he wasn't happy with the rings he bought at the time.

"I decided to come to KFC to give her a small surprise with a meal," he said.

"I don't work so I didn't have enough cash to give wife Nonhlanhla a befitting wedding/jewellery but wanted to do something small.

"Thank you South Africa. Your kindness has truly warmed us. We would have never imagined that our love story would have touched so many of you," the couple added.

The couple plan to have another ceremony — it is not known if they will be accepting the gifts.