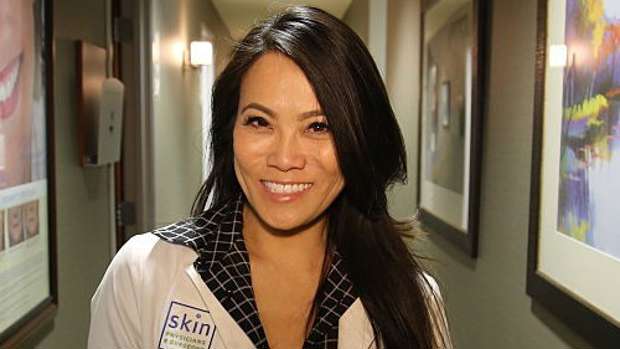 We all know Dr Sandra Lee, a California-based dermatological surgeon who spends her days removing lumps and cysts from her patients' skin.

Also known as Dr Pimple Popper, Dr Lee uses YouTube to share videos of blackhead extractions and gnarly-looking cysts being drained – and they are wildly popular.

And her videos, with titles including 'Blackheads for Dayzzzz', 'Sweet and Sour Chicken Lipoma' and – deep breath – 'A Forehead Cyst That Spit On Me', have been watched more than one billion times.

Next week, the country gets to enjoy all this and more via a Dr Pimple Popper special, with her one-hour show getting its New Zealand television premiere on TLC. And by 'enjoy', we mean 'stare at the TV in horror, while trying not to vomit all over the couch'.

Given it's probably hard to make an hour-long show out of simply squeezing blackheads (or not, with the massive YouTube numbers watching exactly that), this Dr Pimple Popper special is reserved for some real big ticket items: four patients whose large skin growths are inhibiting their lives.

As Dr Lee reaches for her scalpel and squirt-protective face mask to help these folks, we tentatively reach for our spew bucket.

We have 25-year-old single mother, Brenda, whose golf ball-sized lump on her forehead is giving her anxiety attacks, affecting her relationships and stopping her from applying for certain jobs.

Thirty-year-old Angelina, meanwhile, has a massive lipoma (a slow-growing fatty lump, in case you were wondering) on her stomach, which she goes to extreme lengths to conceal. (Even her boyfriend of eight months still hasn't seen it.)

As the good doctor begins to remove this particular five-year-old lump, she tells Angelina: "We need to prepare ourselves for this."

"It looks like boneless chicken," Angelina says as she gazes in wonder at the mass she's just had removed from her body.

Then there's Carla, the most cheerful woman you ever did meet. She's travelled to California all the way from Mississippi in order to visit the famous Dr Pimple Popper from her favourite YouTube videos.

Carla tells us all about the various pilar cysts she has on her scalp, some of which she's had for the better part of 35 years. They even have names.

Finally, there is Delano, a 30-year-old man who's been struggling for a decade with a large lump covering much of his upper back. The massive growth has affected his self-esteem and his job prospects, subsequently leaving him homeless for a time.

Delano's case proves to be a bit of a medical mystery, but it's one that Dr Lee is determined to unravel.

It's safe to say there are plenty of people walking among us who get real satisfaction from watching various skin growths being popped and squeezed.

Over the course of this one episode, Dr Lee is working to completely transform the lives of four people, to give them their self-confidence back and, in the case of Delano, try to figure out why their body is doing this to them.

It truly is serious, life-changing stuff to behold on screen – even if you do want to bathe your traumatised eyes in bleach by the time the final credits roll.

This article was first published on nzherald.co.nz and republished here with permission.