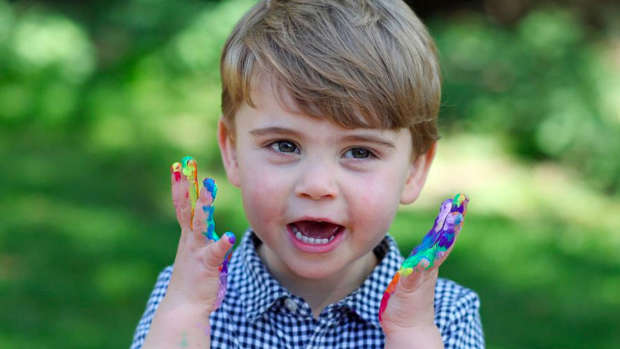 The 71-year-old royal has published a black-and-white image of himself sharing a warm embrace with Prince Louis through Clarence House's official Instagram and Twitter accounts.

The photograph - which was captured by the Duchess of Cambridge - is captioned: "A very Happy Birthday to Prince Louis, who turns two today.

"The young Prince enjoys a hug from his Grandfather, The Prince of Wales. (sic)"

🎂A very Happy Birthday to Prince Louis, who turns two today. The young Prince enjoys a hug from his Grandfather, The Prince of Wales. 📸 The Duchess of Cambridge

Meanwhile, the Duke and Duchess of Cambridge have shared the "reality" of Prince Louis' recent birthday photoshoot.

The royal couple - who also have Prince George, six, and Princess Charlotte, four, together - published a series of photographs taken by Duchess Catherine of her youngest son with rainbow-coloured hands to mark his second birthday.

They subsequently shared more funny images of the tot, featuring the paint smeared on his face, to thank well-wishers for their messages.

One picture featured Louis' paint-covered hands, while the second showed where he'd clutched his cheeks, chin and neck.

🌈 Instagram vs Reality. Thank you for all your lovely messages on Prince Louis’ second birthday! The Duke and Duchess of Cambridge are very pleased to share new photographs of Prince Louis, taken by The Duchess this April.