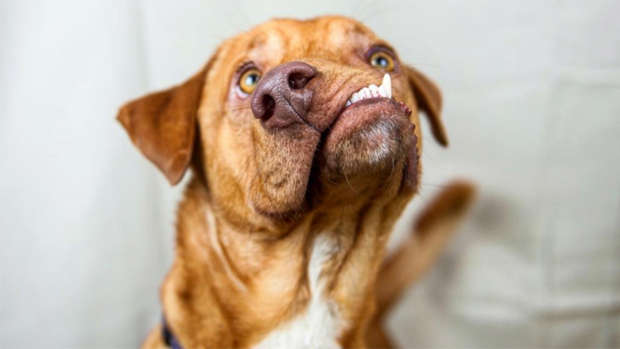 A little dog with an unusual face is to finally have a chance at life after being shunned for months.

The 10-month-old pooch named Picasso, a corgi pitbull-terrier mix, was born to a backyard breeder, but his face was slightly askew with his nose twisting to the right and jaw twisting to the left, the Daily Mail reports.

Many of his teeth also stick into the roof of his mouth because of the abnormality making it much harder to eat compared to other dogs.

It meant that he was never cream of the crop when potential owners would come by to adopt a dog and so he was dumped at a centre for unwanted dogs in California.

#Repost @dogsofinstagram Thank you @dogsofinstagram for featuring our boy! We sure love these brothers and are looking for a wonderful home for them to go to together. Thank you @kelly_beal_photography for this photo! ••• ATTENTION OREGON! Someone please adopt this deserving pup! "Picasso was born this way and despite his funny looks he is happy and healthy. When a back yard breeder was unable to sell him and his brother they were dumped at a high kill shelter and slated for euthanasia. Luvable Dog Rescue saw Picasso and fell in love. They learned that Picasso had a "normal" looking brother who was also going to be euthanized. Luvable couldn't leave "Pablo" behind so they decided to rescue them together. Both brothers are now safe and up for adoption at @luvabledogrescue in Eugene, OR." writes @kelly_beal_photography

Despite his loving nature his breeders dropped him off at Porterville Animal Shelter near Fresno, where dogs go to be euthanised after a few weeks.

Not long afterwards, another dog called Pablo was also dropped off at the centre after the family who owned him decided they no longer wanted him.

As luck would have it, Pablo was Picasso's brother.

Both dogs ended up on the list to be euthanised, but they didn't stay there for long.

At first 🌟Picasso🌟 wasn't too sure of the bright photo lights and huge backdrop cloth that suddenly appeared in his cottage!😳But he figured it out in no time and had fun getting his picture taken!!!😍 #loveThisBoy #bornThisWay #pitbullcorgi #rescuedog #nonprofit

Luvable Dog Rescue based in Oregon ended up visiting the shelter and managed to save both dogs with a view to finding them both a new home.

Liesl Wilhardt, executive director of the rescue, told The Dodo: "I was talking to volunteer Shannon Corbit about the dogs we were receiving and just happened to ask her out of the blue if she had any unusual-looking or special needs dogs.

🌟LIGHTS!🌟 CAMERA!🌟ACTION!🌟Picasso is as smart as he is good-looking!💜We asked him to pose with his paws on the box and he nailed it like a supermodel!💜Picasso and Pablo are very special dogs- they love people and love to learn💜We had fun on our little photo-shoot last night!💜Thank you Mecca @simplymeccarr for the amazing photos...!!!!💜please check out the BUZZFEED story - link in our bio!💜Thanks, Brad Esposito for the great coverage of this dynamic duo...!!!!🌟More to come!!! #bornthisway #pitbullcorgi #lowrider #wonkyface

"She responded, 'Well, as a matter of fact, I do!' and she sent me Picasso’s shelter intake photo. He was curled in a dog bed, and looked very sad. His twisted face was startling, but he had soft and gentle eyes, and for me it was love at first sight!"

🌟Perfectly Imperfect Picasso🌟 thank you Mecca @simplymeccarr for this beautiful photo of our pup!!! 🐾I am taking the boys to our @luvabledogrescue vet, Dr Kimball at Edgewood, this morning - will keep you'all posted!🐾#bornthisway #wonkyface #lovethisdog

Liesl said that she felt compelled to take both dogs after hearing that they were brothers.

"I could not imagine leaving the brother behind to die, so I checked with Ashley, our Luvable manager, to be sure we had the space for both, and then told Shannon to pull them off the euthanasia list – Luvable would take both boys," she said.

Picasso was born this way and despite his funny looks he is happy and healthy. When a back yard breeder was unable to sell him and his brother they were dumped at a high kill shelter and slated for euthanasia. Luvable Dog Rescue saw Picasso and fell in love. They learned that Picasso had a "normal" looking brother who was also going to be euthanized. Luvable couldn't leave "Pablo" behind so they decided to rescue them together. Both brothers are now safe and up for adoption at @luvabledogrescue in Eugene, OR.🌲Picasso does need dental surgery to remove lower teeth that are digging into his palette due to the misalignment of his jaw😟Once Picasso has recovered from his surgery he and his brother will be up for adoption to a home together!!! #bornThisWay #pitbullbassethoundmix #lowrider #rescued

Since arriving in Oregon at the rescue center, the dogs have proved to be gentle and sweet with the pair sharing an unbreakable bond.

💜Awww, one of these dogs is kinda goofy-looking😂. Ha Ha😂💜Pablo and Picasso are VERY sweet and VERY goofy in their own unique ways!💜We love these special brothers!💜 Picasso has some medical issues we need to work through before the boys will be available for adoption💜Please be patient as we've had hundreds of inquiries already from interested Adoptors!💜We want to thank BUZZFEED and Brad Esposito for the fantastic story on Pablo and Picasso!!! #BornThisWay #pitbullcorgi #wonkyface #rescued

Liesl says that she hopes the pair will be adopted as a pair.

Although the dogs have different looks and personalities, she says the dogs thrive off one another.

Good morning from the brothers 🐶 photos by @simplymeccarr

The center has since been inundated with requests to adopt the pair.

Picasso is due to have some surgery in the coming weeks to remove the teeth that are digging into his mouth, but once that is complete it's hoped that both dogs will fine happiness together with a new family.

#Repost from @sealovey. These boys are doing great. They aren't available for adoption yet and we are not taking applications currently for them. Check back on our website for availability! ・・・ Two of our newest rescues at work, Pablo and Picasso. These young brothers were dumped at an overcrowded shelter after their breeder could not find anyone to buy them...Picasso is the guy on the right with the cutest lil lopsided face you ever did see. 🙈 As far as we know, he was born that way, but we'll hopefully know more once he has visited the vet. Pablo is on the left, and is the biggest sweetheart in the world. I know these handsome boys will find homes super fast, but I'm excited to love on them while they're here with us ❤ (These guys will not be available for adoption until their two week quarantine period is up, so please do not send applications until you see them up on Luvable's website).