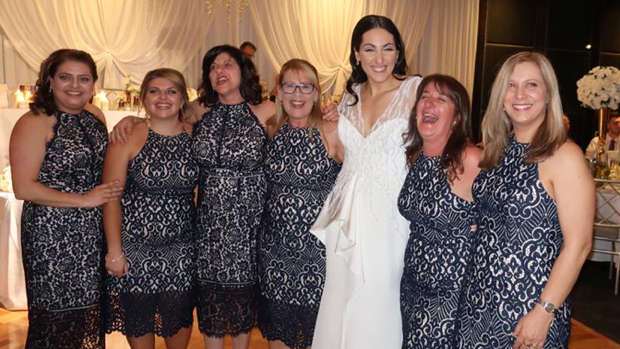 If you thought this was a bride at her wedding with her bridal party, you would be wrong.

These six women found themselves in the middle of every woman's worst nightmare when they turned up to their friend's wedding wearing the exact same Forever New dress.

The hilarious incident prompted one of the unfortunate victims to post on the Forever New Facebook page encouraging the use of a "bridal registry" to help others avoid the blunder they endured.

Sydney resident Debbie Speranza posted: "You really should start a bridal registry so that your customers can enquire whether anyone else has purchased one of your dresses for the same event.

"No we are NOT the bridesmaids just the guests."

The post has since gone viral with over 23,000 likes, and 6,000 hilarious comments, a feat Speranza believes Forever New owes her a voucher for.

"Think I deserve a gift voucher for all this advertisement [sic]", she joked on the post.

The comments range from sentiments from those who have been in the same position, to others who saw the seriously funny side.

One woman believed the best way to handle the situation was to "laugh it off". And by the looks of things, that's just what these women did.

The dress, described on Forever New's website as "perfectly tailored to flatter and accentuate your figure" and help you "make an entrance-worthy appearance", is available for $175.

Just be careful to check with your friends first before wearing it to a wedding.