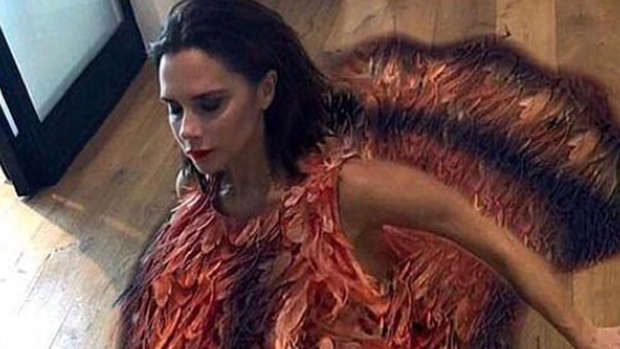 The 43-year-old star got into the holiday spirit yesterday (23.11.17) by taking to Instagram Stories to show off a snap of herself wearing a feathered bodysuit, which may have been Photoshopped, while lying on the floor.

Earlier this year, Victoria - who has four kids, Brooklyn, 18, Romeo, 15, Cruz, 12, and six-year-old Harper with husband David Beckham, 42 - admitted she was thankful she wasn't met with harsh criticism when she launched her first fashion collection in 2008.

She said: "I've got a pretty thick skin. It could have been worse.

They could have said, 'We thought it was going to be rubbish, and it is.'

During a joint interview with her friend Eva Longoria, she said:

"Harper knows that Mummy and Daddy, and Auntie Eva do things to help other people, and she wants to do that as well.

"She understands, even at six, that she is very blessed. She's very lucky to have what she has."