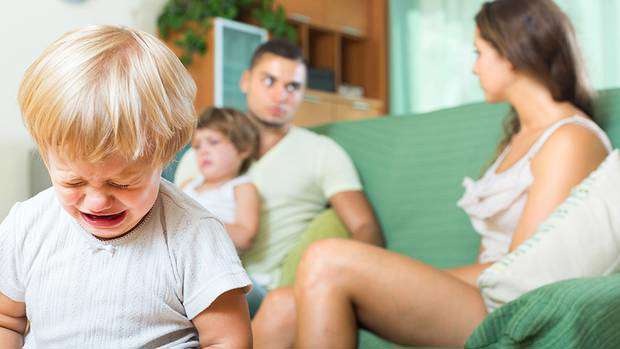 A woman and her three children have been banned from a family wedding because she has not had them vaccinated.

An American mum was planning a family vacation away to New York so they could attend her sister-in-law's wedding.

Now the family have been told to vaccinate or face being banned from the wedding.

"My mother in law and I got on the topic of MMR. She knows we don't vaccinate," the devastated mother of three wrote.

"She mentioned one of the young cousins is too little for the MMR, so I said that my kids will just steer clear; after all, my 3.5, 6.5 and 9-year-olds have absolutely nothing in common with a 14-month-old.

"Two days later and I found out that she called everyone in her family and told them I don't vaccinate and they're all ganging up on me since my husband does not agree with me on not vaccinating, and now we either have to vaccinate or not go. I'm so angry." 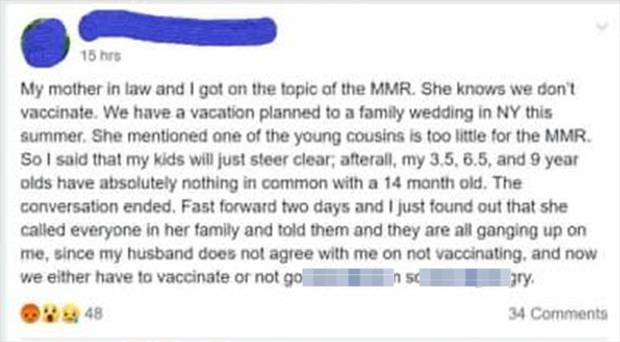 Following the incident, the sister-in-law, who is a nurse, then contacted her brother to inform him he, his wife and their children aren't welcome to the wedding.

Adding insult to injury, her husband is now livid for "making him look bad" in front of his family.

Weeks later, the mum of three revealed she and her children didn't attend the wedding, saying she doesn't "care about losing family" and "won't be vaccinating".

The incident has since been posted to a wedding shaming group, with hundreds of people saying attending a wedding is the least of the mum's concerns.

Another said: "If your own husband doesn't agree with the decision not to vaccinate his kids, sounds like a bigger issue than not attending a wedding."

One commenter suggested the father should take matters into his own hands.

"If he's pro-vaccine he should just take the kids in and secretly get them vaccinated. She doesn't have to know. He can vaccinate them without her consent."

Vaccines expert: 'Humans have a very poor understanding of risk'

A world-renowned expert in infectious diseases says there's no one-size-fits-all solution for convincing anti-vaxxers to give up their cherished beliefs and get their kids immunised - but banning unvaccinated kids from school in his home state of California has clearly been successful.

Professor Arthur Reingold, from the University of Berkeley, is an epidemiologist and infectious disease expert.

There is an overwhelming scientific consensus that vaccination has massively cut rates of mortality from infectious diseases.

Because vaccines have been so successful, many people have never seen the effects of an infectious disease outbreak - and don't appreciate the threat it would pose to their children.

"A lot of well-educated people tend to not fear the diseases we're trying to prevent, but they have fear of the vaccine itself," Reingold said.

"If that's truly your belief set and you want what's best for your child - and most people do, of course - you can understand why they would potentially make a decision we don't want them to make."

Studies have shown humans have a very poor, "skewed" understanding of risk, Reingold said. "But what's even more disturbing, to me, is that providing more information once they've formed an opinion if anything it tends to harden the position they had originally, not convince them they were wrong."

The "Boomerang Effect" - when people harden their pre-existing beliefs when presented with contradicting information - is extremely hard to counter, he said.

"Which really speaks to the question of how do we combat this problem? Those of us who work in preventative medicine and public health think, 'Surely if we give people enough information, or counter disinformation, they'll be better informed and make good decisions'.

"And psychology has found that's not demonstrably the case.

"In many places including the United States, people are getting information and misinformation from the web, from people who have very strange beliefs."