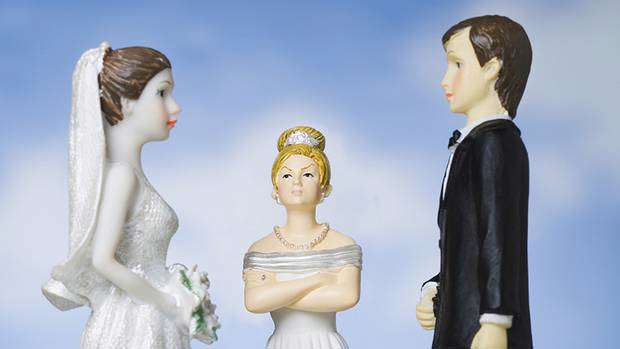 Weddings take many forms these days; from festival-inspired gatherings in fields to sit-down dinners for 200.

But certain traditions remain in place regardless of how unconventional the ceremony might be - like that which dictates guests should refrain from wearing white, to avoid upstaging the bride.

But one 'hurt' bride-to-be has told how her own mother-in-law plans to wear white to her wedding - and she can't help but think it's a 'fingers up' to her, the Daily Mail reports.

She revealed her dilemma in a post on the parenting site Mumsnet, explaining she was torn over whether to confront her husband-to-be's mother, or say nothing in the interests of 'keeping the peace'. 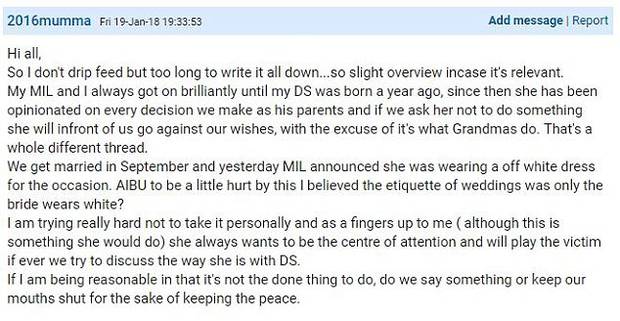 Her post received a flood of responses from fellow mums who agreed it was inappropriate of her mother-in-law to wear white - but many admitted they would swallow their annoyance rather than risk causing a family row ahead of the wedding.

The soon to be bride confessed in her post that she felt as though her mother-in-law was deliberately trying to provoke her by choosing an off-white dress.

She wrote: "We are getting married in September and yesterday mother in law announced she is wearing an off-white dress for the occasion. Am I being unreasonable to be a little hurt by this, I believe the etiquette of weddings is that only the bride wears white?"

"I'm trying really hard not to take it personally and as a fingers up to me (although this is something she would do). She always wants to be the centre of attention and plays the victim".

Fellow users were sympathetic to her dilemma but offered differing advice on how to tackle it; with some suggesting she 'say it straight' to her mother-in-law, while others told her it was best to 'leave her to it'.

A user speaking under the handle 'WhooooAml24601' wrote: "Leave her to it, smile and ignore comments about dress and let her look a fool on the day. Nobody's going to confuse her with the bride, nobody's going to say 'ooh you look like sisters' so let her act the goat".

Another user said: "Judging from what you say her usual behaviour is like it sounds like she's challenging you to confront her about it so she can be the victim. Don't bother. Maybe if she doesn't get the reaction she wants she will quietly change her mind".

Others advised the soon-to-be bride to make a comment that would make her mother-in-law think twice.

One person said: "Tell her it's an excellent idea, that you don't want to be the only one wearing white at your wedding. Suggest a long dress with a tail and a veil".

Another wrote: "I'd say it straight out to her. 'Mother in law, I want us all to be comfortable at the wedding but I'd really prefer it as the bride to be the only in white/off white'.

A small number of people confessed they didn't see a problem with people wearing any colour to their wedding and suggested the bride should look past it.

One person said: "I genuinely don't understand all the drama. Wear what you want and let everyone else wear what they want".

Others gave devious suggestions of getting revenge on the mother-in-law on the wedding day.

A user under the handle 'mumof2sarah' wrote: "If she does wear it and you've got a good relationship with photographer ask him to place mother in law at back of pictures with a 'sorry love there should only be one white outfit at this wedding and the pictures wouldn't work if there was too much at the front, today's about the bride and groom'.

Another said: "She'll make herself look like a bloody idiot. Who wears white to a wedding? Serve spaghetti at the wedding breakfast and hope she messes up her outfit".