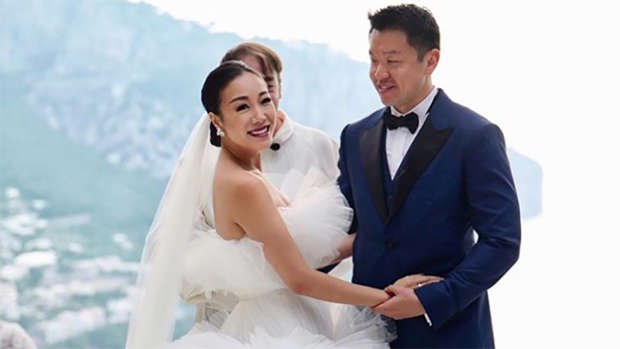 You may have attended a few lavish weddings this year, but none that will top the multi-million dollar nuptials of financier Lincoln Li and his fashion blogger bride Feiping Chang.

The couple wed in a three-day extravaganza in Capri last month, estimated to have cost millions, but full details of the achingly chic celebrations have just emerged thanks to Hong Kong Tatler, according to the Daily Mail .

Former investment banker Fei, as she's known to friends, wafted down the aisle in a custom-made tiered gown by Giambattista Valli, the biggest the designer has ever made.

"For as long as I can remember, I always knew when the day came I would want Giamba to make my dress, because he really makes very dreamlike creations that are just above and beyond," Fei told Tatler. "The final dress definitely exceeded my wildest expectations, it was the biggest dress they’ve ever made."

The saga continues.. 💓💓The beautiful bride 👰🏻 Fei with all her lovely bridesmaids on top of Villa Fersen 🏛 Fei & all her bridesmaids looked stunning with their romantic half updo's + natural waves followed by final touch of cute white baby breath flowers 🌸 Makeup 💄 in natural matt tones with pink blushing cheeks and lips 👄 They were all so sweet & it was a pleasure working with them 🍭🍬#feiandlincoln #capri #italy #Beautylivery #hair #makeup #bridesmaids #beautiful #bride #wedding #hairstyle #makeupartist #amazing #view #china #hongkong #love #photooftheday #picoftheday #updo #flower

Truly a wedding to remember. ✨ Nothing but love & happiness to your both. #fairytaleROMANCE 🌸🍃🍂💍🥂 #FeiAndLincoln 🍋🌿🕊👰🏻

In another first, the couple wed at the cliff top Villa Lysis - where the government granted permission for a wedding to take place for the first time after the couple agreed to refurbish it.

The pair even went as far as building a bridge to link the grounds of the villa to the rooftop where they exchanged vows, and as guests walked up the hill to the villa the couple had changed the name of some of the street and restaurant signs to their 'Fei Lincoln' to surprise them.

I loved my reception dress just as much as the ceremony dress. Another ethereal creation by @giambattistavalli and earrings by @niravmodijewels #feiandlincoln

Lemons for days! My beautiful Welcome Dinner gown designed by one of my best friends @harris_chan_ph of @moiselleworld. The lemon print fabric was hand drawn and custom made with our names entwined in lemon flowers 🍋🍋🍋 #feiandlincoln 📸 by @aarondelesie

Celebrations began with a welcome dinner at the famed Da Paolino restaurant, which is lined with lemon trees, with the bride wearing a lemon-print dress by Hong Kong designer Moiselle.

On day two, guests kicked back and relaxed over all-day brunch at La Conca del Sogno, the bride's favourite beach club, ahead of the big day, with the bride sporting a patterned two-piece by Dolce & Gabbana.

See that pregnant woman right there taking a photo. She's going to eat this whole cake! 😜 The most amazing wedding cake that was assembled by 4 chefs on the dance floor using over 15KG of fresh wild strawberries across 3 layers. YES!!! Swipe left to see them cut the cake 🤗 #feiandlincoln

Their 150 guests were treated to an Italian three-course meal before descending on the dessert room at the villa, with the chef spending 45 minutes making a traditional millefoglie Italian wedding cake covered in strawberries on the spot.

Brides always say "This is the happiest day of my life." Happy barely describes it. Emotions were running high all week and honestly I was very anxious. But the second I managed to walk down the stairs without tripping and saw my man waiting for me, nothing else mattered. #feiandlincoln

Of course, one dress is never enough, so the bride changed into another ethereal white creation for the evening reception, also by Giambattista Valli.

The couple met at a party thrown by Ivan Pun in Burma and Lincoln proposed in New Zealand by recreating the boating scene from Fei's favourite film The Notebook.

QUEEN of the night #feiandlincoln 👰🏻

A little bit of neon NEVER hurt anyone #feiandlincoln

Dessert table awaits down below. Following my nose to sweetness. #feiandlincoln