A groom asked on Reddit whether he was "the asshole" for wanting his bride to buy a cheap wedding dress off Wish instead of the "extravagant" dress she wanted.

The man posted on the sub-Reddit r/AmItheAsshole, complaining about the expensive wedding dress his fiance wanted to get.

Using a throwaway username to try to not get found, Josh8449 said he and his partner Emma booked a venue for July this year and each set $10,000 aside for the wedding.

At this stage, all that is left to do is buy the wedding dress and the bridesmaid's dresses.

He explained the couple are not "the extravagant types" so the dress his fiance chose was a surprise to him.

"I know everything is more expensive when it has the term wedding attached to it what I wasn't expecting was an $950 dress plus $120 veil," he wrote.

He said he looked online and found dresses for as low as $50.

"I'm not trying to get her to cheap out on her dress, but she will literally wear it once, one dress for over $1000 is just insane, that would fund our honeymoon," he explained.

"I tried to show her some dresses I found on a recommended app called Wish and others on website's, but she was having none of it," the groom added.

"It turned nasty unfortunately because I said I refuse to drop such a large amount of money on a dress and she argued that she is using her own money for the dress."

He disagreed with her point as the finances would be joined when they got married.

The groom said it's not a matter of "not being able to afford it".

His partner Emma was not having any of it. The man later edited the post to add that his fiance had found the thread on Reddit.

"Emma found this thread, it was a mistake to post here and I'm sorry I posted our problems on Reddit," he wrote.

Most people seemed to agree the man was wrong and should let his fiance choose whatever wedding dress she wants.

"You say you don't want her to cheap out, but then you say you want her to buy a $50 -$100 wedding dress. That's cheap. That's cheap even for a regular dress. Those cheap dresses you're finding online will look terrible in person and are the source of so many disappointed women and jokes. Wedding dresses and their tailoring are expensive. $1000 is actually a low priced dress," one person commented.

"Regardless of dress type, though, your reaction to her - calling her names and deciding you have veto power - is the real problem. You should be solving this issue together. If you can't, maybe it's not time to get married yet." 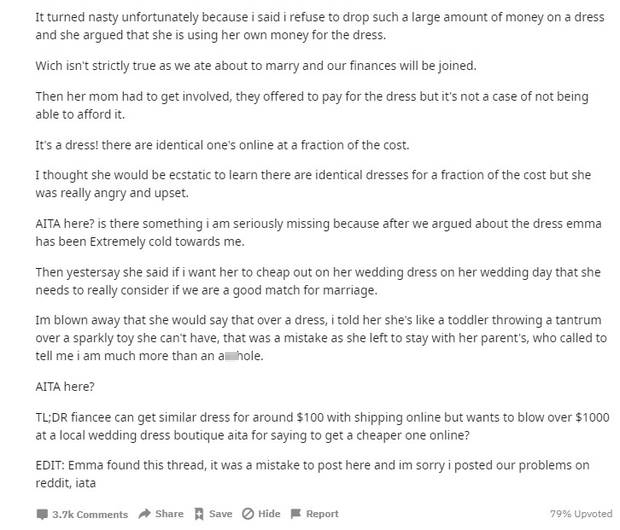