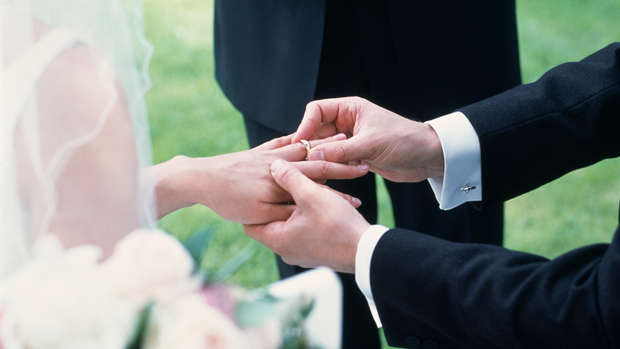 When the bride walks down the aisle, usually, all eyes are on her …

But not during Australian bride Stephanie Agnew’s wedding.

While the 32-year-old married her true love, Robbie Campbell, all 54 guests were asked to wear blindfolds for one very special reason.

Stephanie lost her sight to Cone-rod dystrophy when she was 27 and has never actually "seen" her now husband.

And so guests were asked to "experience" the wedding the same way she was. How sweet is that?!

"The blindfolds were received well by the guest as they were experiencing that moment in the same way as Steph and her mum, who is also blind, were experiencing it," Robert revealed to the Daily Mail Australia.

"All of our vendors put in special efforts to make sure that Steph could appreciate all of the sensory elements that made the day especially the videographer, Lemon Tree Film House,  who is putting together a film with extra audio descriptions from the day so Steph can experience it audibly instead of visually," the groom continued.

“When we lose one of our senses the others become heightened which allow us to experience something as beautiful as these vows in a totally unique way. Today we get to experience that in Steph’s way.” During Steph & Rob's vows to each other, the guests were invited to wear a blindfold so that that everyone could experience what Steph experiences each and every day. Steph has something called Cone Rod Dystrophy which is an inherited eye disorder that completely took away her eyesight shortly before she met Rob. We have something quite special planned for Steph & Rob, but in the meantime we're going to try to explain the contents of this short clip for Steph, her mum, her brother and any vision impaired friend who will be unable to watch this film but with the help of technology can have this text read. Via our Facebook page -http://www.facebook.com/lemontreefilmhouse ---------------------------------------------------- To see the photos by - @jamesdayweddings Celebrant - @jarrad_bayliss Venue - @weddingsattiffanys Make-up - @lechicskinandbeauty #visionimpaired #blindfoldwedding #nosight #blind #wedding #videographer #maleny #jamesday

The adorable couple met in October 2016 after being next door neighbours for two years and were engaged a little over one year later.