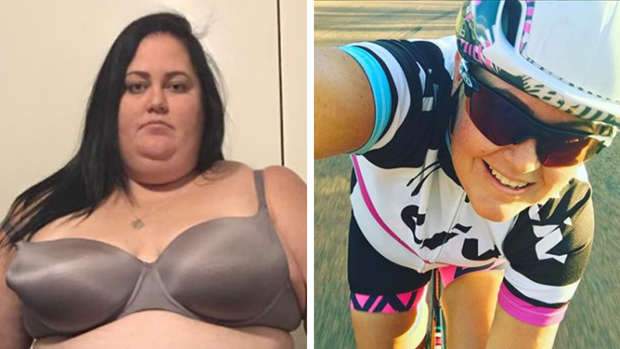 One woman has shed more than half her body weight and become a triathlete after deciding to ditch the junk food.

29-year-old Elle Goodall weighed in at 184kgs at her heaviest and was told by doctors that she wouldn’t live past age 40 if she didn’t change her lifestyle.

That’s when she decided to start a stringent exercise and diet plan, that helped her not only lose a staggering 115kgs but eventually take on a triathlon.

"I was going through a really big change in my life," the Australian told Channel Nine’s Today, "I wanted something that was going to be a huge challenge."

"The triathlon has always been the ultimate for me – it’s three sports in one. I’m incredibly proud of myself for doing that."

Now at 69kgs, Ella has completed multiple triathlon events, including the finishing the Cairns Iron Man in just six hours and 46 minutes.

Speaking to the Cairns Post, Ella confessed: "I couldn’t even tie my own shoes up – things that most people take for granted, I couldn’t do it. I couldn’t sit down on the ground and get back up.

"Now, I just want to prove to people that if you reach that point, there is something you can do, and you can save your own life."

PRIDE!!! To say I'm proud of my journey so far is an understatement it is to the point I cry when I watch the replay of my sunrise interview over and over and over again lol 😂 I cry because of how proud I am in less than 2 years I have turned my life around from nearly loosing my battles with weight and fast food to becoming an ironman and I have been so lucky to have some amazing people along on the ride my mum n dad and my sister the biggest cheer squad I know running all over the country to watch there daughter do triathlons and ironman events @diversworldspearfishing (diversworld is my mum n dads shop check them out) the person who made me realise just how strong I am Vicki she was my first ever coach and guided me to Noosa triathlon and my first dirt n dust @vitalizefitnessandlifecoaching @emma_quinn_88 my AMAZING coach who prepared and coached me to my first ever podium at Julia creek dirt n fits this year then cairns ironman 70.3 and now working me nice n hard in the lead up to busso full ironman in December where I will turn 30 and become an ironman!! And Aaron who has had to put up with all the complaints of sore muscles and the $$$$ of it all this is not a cheap sport I have chosen you are all the glue and the ones who together have made this journey possible I can not wait to see what is next after busso maby 🌺🌴Kona🌴🌺 🙊🤞that sure is where my goals lay aim for the top I know I am going to be doing the big dance 💃 in Kona some time soon @ironmanoceania watch this space 👱🏼‍♀️ I promise you I'm going to do some #epicshit #doepicshit #ironman #ironmanoceania #ironmantraining #ironmanaustralia #swimriderun #swimriderunlove #livcycling_aus @livcycling_aus @giantbikesaus @zippspeed @catfishdesigns @garminau #weightlosstransformation #weightloss #weightlossjourney @lornajaneactive #watchthisspace #brissy #BRINGITON #brisbane #brissybound @brisbane @giantnoosa @giantsunshinecoast

Ella’s story is truly inspirational! Good on ya girl.