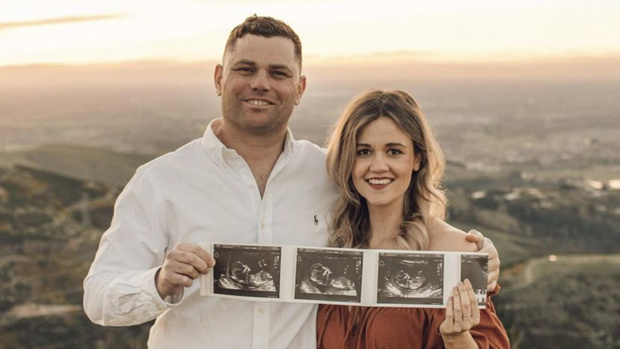 The unlikely love story of Married At First Sight New Zealand couple Brett Renall and Angel Fulljames has hit another milestone after they announced Angel was pregnant.

The couple, who have been together more than four years, announced their special baby news on social media, writing "Mum & Dad" while holding photos of the scans of their baby.

Brett and Angel said their baby is expected to arrive in April, 2022.

Kiwis were quick to congratulate the happy couple on their next milestone.

"Awww congratulations. You two are lovely and will be awesome parents," another wrote.

It's been four whole years since Brett and Angel met on Married at First Sight and became the centre of one of the country's unlikeliest love stories.

Two everyday Kiwis took the plunge to find love on a reality TV series known for its dramatic scandals, and actually somehow managed to live happily ever after.

Following the show, Angel moved to Lincoln just outside Christchurch soon after filming MAFS and hasn't looked back.

"I think you imagine the best-case scenario," she said of going into the show.

"But then obviously, at the same time you feel like it's a bit of a miracle because the odds aren't really in your favour.

"I had no idea four years ago that I'd be living in Lincoln. The fact that this is our regular life - it's pretty crazy, and it was created from this insane experiment."

The couple's television marriage was legal from the get-go, unlike the nuptials in subsequent series.

They loved the day - wedding photos sit in pride of place as you enter the front door of their cosy home - and there's been no urge to repeat it.

"It was such a good day and it went well so we're happy with it," said Renall. "It just felt like a normal wedding."

In early 2021, Renall revealed they had planned to start a family in the near future.

"We want to start a family so hopefully that'll happen in 2021," Renall revealed.

"We get asked that a lot, usually from family members, but when you add on a quarter of a million Kiwis asking you … we're well aware that people can't wait.

"Be aware New Zealand: when it happens you'll be the first to know. Everyone, just hold the phone."