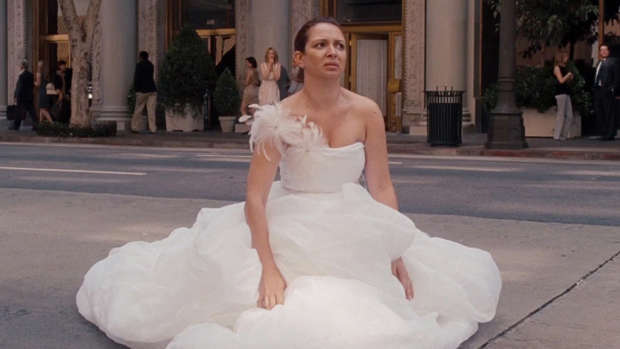 But this bride's traumatic and messy big day ordeal – which saw her completely ruin her $22k (£12k) wedding dress - has to be one of the worst out there.

According to the nameless bride’s wedding planner – who took to Reddit to share the terrifying tale - the newlywed woman "had gambled on a fart and lost in a big way".

"The bride had, to be honest, been quite a bridezilla, but it's my job to deal with those things. At this point, the ceremony had ended, cocktail hour is shutting down, professional photos were taken," the planner explained.

"We were prepping to transition to the entrance of the bridal party, which would be followed immediately by first dance and cake cutting. During this, the dinner would be staged, so every aspect was being fairly carefully timed out.

"A few moments later, my headset beeped on, and my assistant said 'we have an issue'. It turns out that the bride had gambled on a fart and lost in a big way.

"The fifteen minutes pass. Then twenty. Finally, my earpiece beeps on. 'The previous issue is more than we anticipated.' I ran over to find my assistant looking horrified."

Supposedly the bride had been drinking "healthy" detox shakes to stop "last-minute bloating", but they hadn’t sat well with the cocktails and big breakfast she had had earlier in the day and caused her to accidentally expel bodily waste right before she was set to make her reception entrance.

"The bride, it turns out, had been using some health shakes in an attempt to fix last-minute bloating," the wedding planner continued. "This had mixed poorly with the cocktails from earlier, and she had eaten a fairly decent breakfast. The substance that had come out of her body, as a result, defied explanation.

"It was slimy, oily even, with stringy bits and the consistency of hair gel. Not only had it been a rather profound accident, but the smell was unrivalled. Generally, a substance no human body should emit."

To make matters worse, the bride was wearing a huge layered ball gown making it impossible for her to get to a bathroom in time.

"Now, the bride was wearing a huge, full ball gown, with a fitted, boned, strapless top in a sort of embellished mesh. Underneath, she had a shaper garment and hoops and slips. We had already realised there was zero way of her going to the bathroom."

Oh and the bathrooms? Apparently, the bride had opted for a "shabby chic" styled wedding in a rural historic barn – which meant the only toilets available were nothing more than port-a-loos.

"But the thing that set it over the edge was that the shaper the bride wore was a latex deal that came down over the thighs and up to her bra," the wedding planner revealed. "Waterproof, the poo had just sort of filled it, like a water balloon of horror. My assistant had opened up the snap crotch and just released the evil trickling down the bride’s thighs.

"My assistant quickly sealed it back up and she and the bride vainly tried to wipe up the goo, dry, with toilet paper. This just spread it around, so they decide to give up."

However, the bride – despite the mess and disgusting smell now radiating off her - was determined not to keep her guests waiting and decided to put on a brave face and continue on with the rest of the evening’s wedding celebrations.

While the groom was "vaguely disconcerted by his new wife's odour" they took to the dancefloor to perform their choreographed first dance.

"As the groom spun his bride around, hand on her waist, he is squishing the poo up the insides of the waist trainer, up and out the back waistband," the wedding planner said, recounting the "fresh horror".

"To our horror, we watch as an oily stain spread across the mid-back of the gown. As we are still cringing from this, the groom sets his hand firmly in the middle of the poo stain."

The wedding planner revealed however that she was eventually able to cut the bride out of her gown and sponge off the "disgusting" mess.

"It may be the most disgusting thing I've ever dealt with," she said, adding that the newlywed’s couples photos from the day "were beautiful".

Talk about a wedding nightmare!