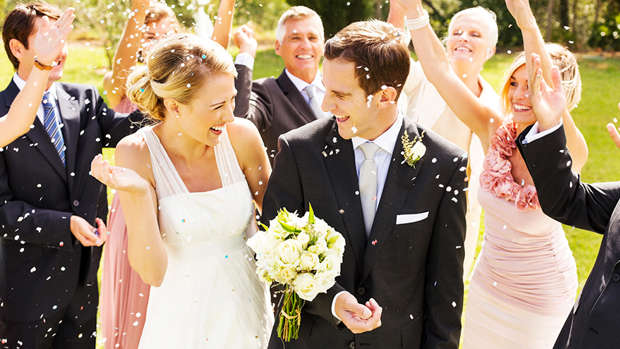 For the bride and groom to be, their wedding day can be a stressful and exciting time - and with a little luck everything goes off without a hitch.

However, for these unlucky couples, extra stress was heaped onto them on their big day thanks to their ill-mannered guests' questions, behaviour and requests.

Reddit user CantEvenOk posed the question: "What was the most obnoxious request made by one of the wedding guests?"

The responses came in fast as people recounted everything from the rudeness of Mother-In-Laws to the thoughtlessness of their friends.

Here are 20 of the most insane, jaw-dropping stories people shared:

"My MIL (mother-in-law) tried to manipulate my wife into letting the MIL'S boyfriend walking my wife down the aisle instead of her father."

Two birds with one stone

"Mother-in-law asked us if we could reschedule our wedding closer to step brother's so she could come into town once for both. Our date was booked a year previously during the time of the request."

"While my wife and I were taking pictures with guest and some were still getting their meal my grandmother cut our wedding cake and began serving it. We never even saw what it looked like."

"My aunt expected us to delay the ceremony until my cousin arrived, since he had been at work. Uh no."

"My sister-in-law showed up the night before the wedding and tried to redecorate. She said the decorations were trashy and that she didn't like the caterers or the location. She actually tried to convince my wife and I to fake a break up so that she could replan the entire wedding. I eventually had to throw her out of the wedding party and my wife asked her not to come to the wedding."

Our way or the highway

"My wife's parents refused to pay for anything if we didn't hold our wedding at their church. We said fine, we would pay for it ourselves. They then tried to dictate that we could not serve alcohol or have dancing at the reception. Which they weren't paying for. We told them they didn't have to attend if it was a problem for them."

"My great aunt called my bride and asked her to come pick her up from the airport… four hours before the wedding. Taxis are a thing, Aunt Pearl!"

"A couple showed up at the reception too late for the dinner, it was already over, so they went into the restaurant of the hotel and charged their meals to the wedding party."

"Not on the day of the wedding but my monster-in-law requested that my wife's entire family boycott our wedding.

When my wife told her mother that we were getting married her response was 'why are you doing this to me?' and then told my wife that she wouldn't go and that she would convince her whole family to boycott the wedding.

This devastated my wife, she told my stepmom who took her out to find a wedding dress that day and she offered my parents backyard for the ceremony and reception.

Well after my monster-in-law found out that my stepmom took my wife dress shopping she freaked out because that was supposed to be something she and her daughter did together (in her mind) and she confronted my wife and my wife was like, 'why do you care, you're not even going?' At that poin, the MIL realised it was gonna happen without her and she changed her tune and got on board pretty quick."

That date won't work for me

"My brother's wife asked me to postpone the wedding 'a year or two' because she was going to try to get pregnant the following year. She also insisted the wedding cake be vegan for religious reasons . I was fine with providing a vegetarian meal option for the few guests I knew would want it. But the cake? No. That's your religion, not mine. She ended up not coming anyways. I'm fine with that."

"It was the handful of guests who couldn't be bothered to retain the address and directions that were provided to them several times via US mail, email, and internet link. And, who finally, when all that failed, needed to text me repeatedly to get clarifications on the directions instead of just using f***ing Google. You know how busy a person is on their wedding day? I had more important things to do than answer texts about which exit to take."

Excuse me, only the bride wears white

"My dumb little cousin requested to wear a white dress (she's 17 and well on her way to being an Instagram model so people would have congratulated her all day) and that was still less annoying than the part where my mother in law without notifying ANYONE brought a f***ing s***load of potted succulents because 'she had heard there would be no flowers.' And I had absolutely spent hundreds of dollars on flowers already.

So I could tell my white-dress-wearing cousin to shut the f*** up and change, but I had nothing prepared for a pallet of cactus out of the blue. We still grumble about that one."

"The mother of the bride wanted the DJ to help her play a game at the reception. The game was this:

The bride sits blindfolded on a chair, while the groom and groomsmen circle around her. She then has to feel their junk and guess which one is the groom.

The DJ was inexperienced but had minimal enough common sense to come ask for my professional opinion. I told him if he wanted to keep his job, he would never in a million years do that, and if MOB comes back, he needed to keep conveniently forgetting about it."

"The day of the wedding, my mother tried to pressure my husband and I into switching from the honeymoon suite into the room she and my father were in with my kid sister (small bed, crowded, and a creepy mini bed in the closet for my kid sister). Unless I misunderstood her, we would have also had to share the room with my kid sister on our wedding night (because of the spare bed being in that room). She ONLY asked because she thought that the whirlpool bath in our room would be nice for her back. I told her no, that we had specific plans for the bath tub that night, and she dropped it."

Get your own photographer

"One of the bridesmaids brought her fiancé to the wedding, and wanted our photographer to do an impromptu engagement photo shoot. Photographer laughed in her face."

It's not your day

"My mother-in-law wanted to wear a white gown down the isle. Insisted. Denied. Then complained the wedding didnt focus on her enough."

"When my cousin and her husband were planning on getting married they wanted a small wedding. Something like 40 to 50 people. Both her mother and future mother-in-law weren't having that and took it upon themselves to invite everyone and anyone they could. The guest list quickly shot up to around 700 people. They ended up changing the venue to somewhere way out of state to cut down the guest list and have the smallish wedding they wanted."

"We made it clear that children were not invited to our wedding. We saw it as a way for parents to take a night off, party a little, relax, sleep in, etc. Plus we had to pay for those plates, there was no chicken nuggets on the menu, and our families have over 30+ kids total. I had a cousin call me 2 days before the wedding stating that there was no way they could come without their 3 year old, and that we should pay for their room if we wanted them to attend or they would not come. They did not attend but they did send a card we got about 2 months later that just said 'Congratulations!'."

Not the time for photos

"As my father-in-law opened the door to walk down the aisle with my wife, one of his cousins came up from behind and asked them to stop for a picture."

"We had a guest who said he did not need a plus one, so we didn't plan one for him. When we received his rsvp he requested 2 meals, so we figured he was bringing a date, NBD. Nope, he actually wanted 2 for himself. At $150 a plate."