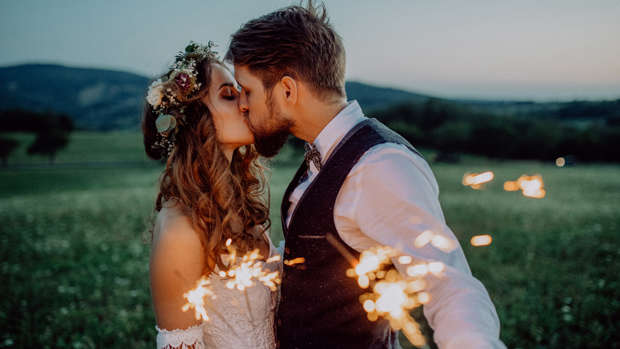 Getting busy on your wedding night is a marriage tradition that goes back to centuries.

But it turns out more than half of newlyweds admit they didn’t end up rolling around in the bedsheets after tying the knot.

According to a poll from wedding website WedShed 51 per cent of those who answered revealed that they didn’t consummate their marriage on their big day – and some of the reasons the couples gave a range from practical to giggle-inducing.

"Definite no!" one bride said, explaining what happened on her wedding night. "He was too smashed. we got Maccas, hew was adamant about watching mission impossible. Fell asleep 6 minutes in, spewed every hour into the flower box, the stinkiest wedding night I’d say."

"We had a three-month-old!" said another. "So we kept drinking and cuddled to sleep instead. It was rad."

"I fell asleep in my gorgeous lingerie after flipping through our guestbook together," another added.

"Every intention! But we both passed out in the spa at 2 am. Woke up very cold and wrinkled. Sexy," one woman said.

"If you didn’t get Maccas on your wedding night, are you even married?" another bride joked.

As for the 49 per cent who admitted to doing the deed on their wedding night explained why they chose to, with many stating that tradition played a big factor.

"Did it out of tradition-sake but passed out immediately afterwards. Hardly remember," one bride revealed.

While another added "Yes, but fell asleep straight away" noting her husband had even fallen asleep for an hour on the toilet afterwards. "So romantic!".

One daring bride even revealed that she and her hubby didn’t want to wait until the wedding night, "we actually had a sneaky romp in between ceremony and party, a quick visit to the cabin!"