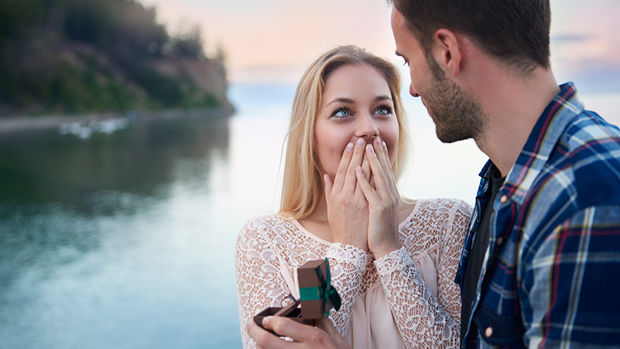 Engagement season is well and truly upon us and with the silly season just around the corner, many couples will be thinking about popping the question.

Maybe a family gathering feels like the right spot after asking for their father's blessing? But how important really are these traditions in 2020? And more importantly, how important are they to the one you love?

New statistics are out that expose what Kiwi women actually want from their special moment when their partner asks the question of a lifetime.

In a recent survey New Zealand engagement ring studio Nolan and Vada have revealed some interesting insight into new trends for Kiwi couples getting engaged.

Future father-in-law's blessing – not so important

Times have changed and where the partner would have to traditionally ask for their future father-in-law's permission, that's not necessarily the case any longer.

Kiwi women are moving with the times and a huge 46 per cent say they wouldn't want their partner to ask permission to marry them.

However, 54 per cent of Kiwis still believe in the classic tradition and the nerve-wracking conversation.

​Love wasn't canceled during lockdown! A love-filled congratulations to Isaac & Caitlin on their recent engagement ♡ It was a huge pleasure for us to be part of this special moment and we wish you guys all the best from the team here at Nolan and Vada ♡ ​Link in bio (As mentioned on @nzherald today)

A massive 72 per cent of Kiwi women say that ethical sourcing is very important when it comes to choosing their engagement ring.

Only a mere 28 per cent of Kiwis think that ethically-sourced engagement rings are not important.

Money – how much should Kiwis spend on the ring?

The majority of Kiwi women think their partners should spend approximately $5000 on their engagement ring.

New Zealand and the world are heading into a tough time financially post Covid-19 and 43.73 per cent of Kiwi women would want their partner to spend $2500 - $5000 on the engagement ring.

The results show that 56 per cent still want the experience of being proposed to, to be a complete surprise.

However, 37 per cent of Kiwi women want to be involved in the engagement ring design process with their partner.

Only a mere 6.45 per cent of Kiwi women would like to do the ring shopping together.

Coloured engagement rings are on the rise

People are looking for more options to stand out from the crowd with the uniqueness of a coloured gemstone, such as sapphire, versus the typical diamond engagement ring.

Large carat sizes are not as in fashion as they used to be with the actual centre stone size only mattering to just over 3 per cent of Kiwi women.

The most important factor in their engagement ring is the ring design (i.e, the stone cut and shape, three-stone) with a whopping 68 per cent of Kiwi women agreeing.

The other most important aspects were equally the ring craftsmanship and the centre stone type at 11 per cent.

All survey results from September 2020, by Nolan and Vada.