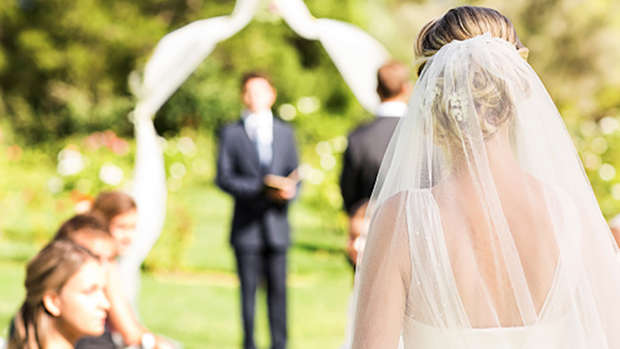 Weddings are one of the oldest and most traditional events known to man kind.

But it turns out some wedding traditions are kind of weird and don't make much sense - even though we don't really question them.

One traditional item immediately associated with a wedding is the bridal veil, a semi-transparent fabric that is draped over the brides face then pulled back by her partner at the beginning or end of the ceremony.

Well, apparently veils first became popular in the Roman times when a red sheet, called a 'flammeum', was used to cover the bride from head-to-toe. This was supposed to make the bride look like she was on fire which, in turn, was intended to scare off any evil spirits looking to ruin her big day.

Over time, the veil became a method to disguise the bride from her husband who wasn't supposed to see his new wife until the deed was done. The veils were also usually floor length and weighed down so the bride couldn't run away.

Additionally, the veil is said to be a symbol of the husband taking a woman's virginity, and the peeling back of the fabric at the alter is supposed to represent the breaking of the hymen.