A woman reviewing security camera footage at her home was surprised to notice a little boy sneaking into her garage.

The footage revealed a boy riding past Hollie Breaux Mallet's home in Louisiana before jumping off his bike and running into her garage. But rather than being up to no good, he was captured playing with the woman's pet dog, Duchess. The footage then shows him leaving the garage and riding away. 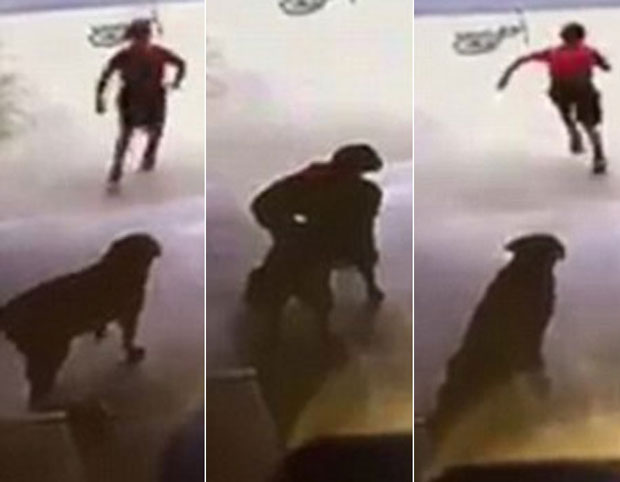 The young boy was seen riding his bike past her house before jumping off and running into the garage to play with and cuddle her pet dog Duchess.

Moved by the boy's affection for her pet, Mallet took to Facebook to try and identify him. And it didn't take long.

"Attn Neighbors! Anyone know who this sweet little boy is? Every now and then when he rides his bike he will quickly come and love on my dog or play fetch real quick, but always leaves quick like he doesn't know if he should be here!" she wrote.

"I'd like to tell him he's welcome to stay and play, she loves the attention!"

She shared the security footage alongside the post, which has been viewed over 1.3 million times.

Within 24 hours, the boy's mother, Ginger Clement Breaux, confirmed the boy in the video was her son, Josh.

"Thanks for the add Hollie! Josh talks about your dog all the time! Every time we pass he looks to see if she was sitting where he could see her. Just didn't know he was doing things like this," she wrote.

"Last night when I first saw it, I was torn as a mumma being happy and upset because he knows he shouldn't be on someone's property, but I wake up this morning more happy that he just absolutely adores dogs so much."

Mallet was thrilled to learn her dog's admirer had been identified and hoped he would continue to visit Duchess.

Josh's family dog Bella had passed away last year, and Josh has been longing for another dog ever since. Due to after-school activities and other commitments, it may not happen for a while! But it's clear the boy's loves for pooches is incredibly strong.