Eric is extremely grateful to taxpaying kiwis and his wife - listen to his post-race chat with Polly & Grant here.

They have gone 69 races at 24 international regattas without defeat in the class. No one has completed more in rowing's history. In a discipline of such technical nous, they have overcome every conceivable doubt in every heat, semifinal and final on every visit to a race course.

In case you were wondering, since their first win on June 19, 2009, they have gone 2610 days without defeat in tandem.

Meanwhile, in what many people are calling a 'surprise silver', Luuka Jones has picked up somesilverware in the canoe slalom. 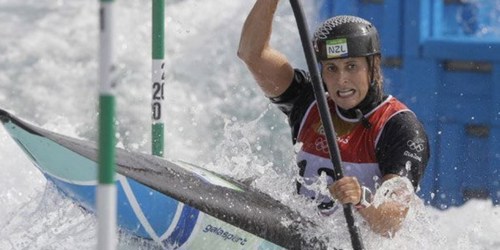 Tauranga-born Jones was the slowest qualifier for the 10-person final this morning, but pulled out an outstanding run as the first paddler.

Her silver medal is the third at these games. After a dismal couple of days, it made for an encouraging Friday along with the gold that went to Hamish Bond and Eric Murray in the rowing.

Jones was leading but was narrowly beaten by Spaniard Maialen Chourraut who took gold.

The 27-year-old Jones is at her third Olympics, having been eliminated in the heats at Beijing in 2008, and making the K-1 semifinals in London four years ago when she finished 14th.