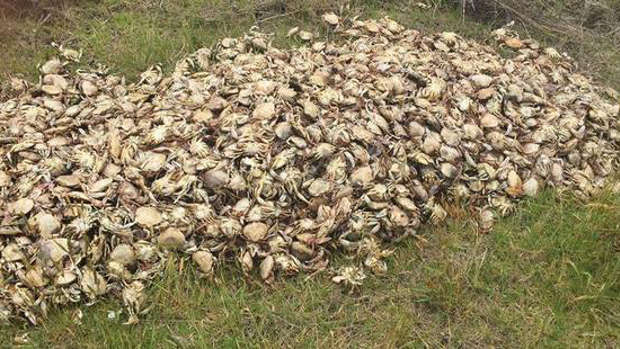 The dumping of hundreds of paddle crabs in sand dunes off Ruakaka Beach has angered locals and sparked an MPI investigation.

The huge pile of crabs was spotted by concrete finisher Shaun Davis of One Tree Point when he was out with friends driving a four wheel drive on the dunes last Friday.

He took a photo and emailed it to the National Institute of Water and Atmospheric Research (Niwa) in Wellington, which confirmed they were Ovalipes Catharus, commonly known as paddle crabs.

But two fisheries officers checked the sand dunes yesterday morning but could not find the crabs.

The public described the dumping on the Ruakaka/Bream Bay buy sell swap Facebook page as a waste of seafood and said those responsible had no respect for the environment.

"There were heaps of people crab hunting a couple days ago, up by the refinery entrance, the car park was jam packed. I wonder if it was them," Ayla McFadyen said.

Another said: "This is disgraceful. No respect for our Bream Bay".

Mr Davis said the crabs were bigger than the palm of a hand and were found about 100 metres from the foreshore.

He presumed they were a day old but were not smelly.

"It was pretty ridiculous. I haven't seen that many before." He believed it could have been done by a commercial crabber because of the volume.

"The only plausible explanation for the dumping is someone must have been spooked by the high presence of fishery officers in that area and decided to dump them.

"The increased presence of fisheries officers was because mussels in the Marsden Pt area were under a lot of pressure lately and also people can now get access to the beach from Rama Rd," he said.

Mr Rudsdale said it was an "awful lot" of crabs but he doubted they were commercial because of where they were found.

He said MPI saw a picture of the dumped crabs on the Ruakaka/Bream Bay buy sell swap Facebook page yesterday before two fisheries officers were sent to search for the crabs but without success.

Mr Rudsdale said commercial fishermen would normally dump their catch at sea and not on land. He called for public help in locating the dumped crabs and finding those responsible.

The daily limit for paddle crabs is 50 but there are no size restrictions.