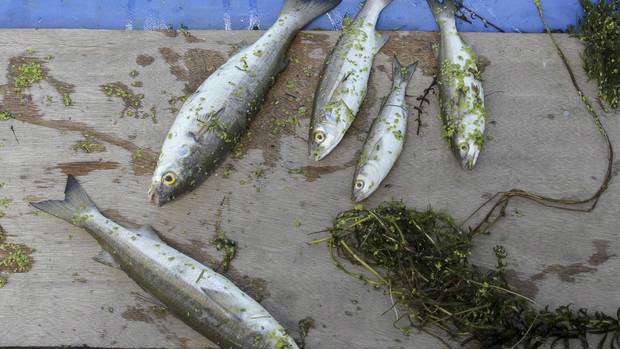 A Northland man has been fined $1000 and has had a car and cash seized after selling mullet illegally.

Mario Pihema, unemployed of Kerikeri, was caught by a fisheries officer selling the fish from his partner's vehicle at the intersection of State Highway 10 and Kerikeri Rd on September 2, 2017.

He was among three Northlanders convicted in the Kaikohe District Court for various breaches of the Fisheries Act.

Pihema, 49, pleaded guilty to selling mullet in breach of the act and was fined $1000 plus $130 court costs. His partner's vehicle, $20 cash from the proceeds of sale, a chilly bin and two cardboard signs advertising fresh mullet were seized.

Pihema caught between 25 and 30 mullet in a net at Kerikeri Inlet and advertised them for sale at two for $10. He was trying to make a bit of extra cash as he had a new baby.

In another case, Vincent William Sweeney, also from Kerikeri, was fined $1000 and ordered to pay $130 court costs for fishing without a current permit and failing to keep a record of fish sold. He has been a commercial fisherman since 2009.

In April last year, the Ministry for Primary Industries (MPI) sent him a payment remainder notification for overdue levies and fees. Another remainder was sent a month later with a note that if the outstanding amount was not received by June 20, his fishing permit would be suspended. Sweeney, 32, did not pay and his fishing permit was suspended.

Despite the suspension, he made eight trips and completed catch, effort and landing returns for each day's fishing and submitted them to MPI. He told MPI he wasn't aware his permit had been suspended as he had difficulty receiving email due to poor WiFi at home.

Sweeney caught 133kg of flatfish and 30kg of grey mullet over the eight trips and said he sold all fish by way of wharf sales.

However, he wasn't able to locate receipts for fish sales. His 5m fishing boat was forfeited to MPI.

Moerewa woman Vanessa Beazley was sentenced to 150 hours community work for
offering to sell shucked oysters at $15 a punnet on her Facebook page. The oysters were harvested by a family member recreationally.

She was directed to attend an interview to allow her to obtain legal advice and to question her about the oyster sales but she failed to appear. It was not known how many sales were made via Facebook.