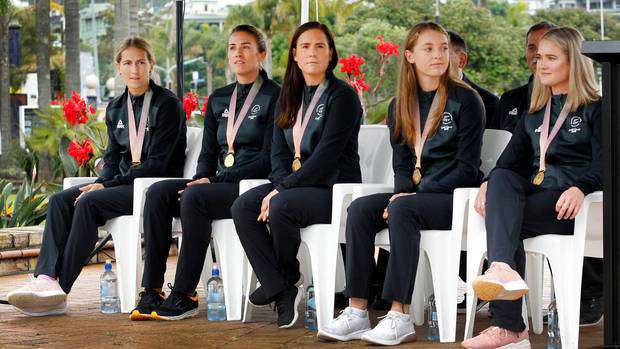 The five Northlanders who helped the Black Sticks win the hockey gold medal at the Gold Coast Commonwealth Games have all been retained for the team's next tournament in London.

Stacey Michelsen, Brooke Neal, Ella Gunson and Madison Doar, who all still play in Northland, and Sam Harrison, who plays in Auckland, have all made the Black Sticks side to compete at the Vitality Hockey Women's World Cup in London next month.

The New Zealand team includes just one change from the group who won gold in April.

Auckland midfielder Lulu Tuilotolava will suit up for her first major tournament after making her debut during the Pioneer Energy Women's Tri Nations in Cromwell.

It's an experienced side led by captain Michelsen (254 tests), while Anita McLaren (264) and Sam Charlton (219) have all played more than 200 matches.

Vantage Black Sticks Women's head coach Mark Hager said it's a strong team with plenty of players who have proven they can match up against the best in the world.

"It's a very versatile team and we believe there's a good mix of youth and experience within the group with talent across various positions.

"We think we've got the right balance - all 18 players in the side deserve their spot and I know they are very excited. After winning a gold medal at the Commonwealth Games we probably go in with a bigger target on our backs but hopefully that fuels us to lift even further as a group."

The Women's Hockey World Cup is the biggest prize and most cherished victory in hockey alongside the Olympics.

Every four years, the Hockey World Cup sees the world's greatest teams play some of the toughest, most skilful and entertaining international hockey imaginable.

In 2018, the tournament has been extended to 16 teams with teams playing three group stage matches before the elimination phase.

All games will be played at England's 10,000-seater Lee Valley Hockey and Tennis Centre in Queen Elizabeth Olympic Park, London.

The Vantage Black Sticks Women open their campaign against Belgium (world ranking 13th) on July 23 at 6am (NZ time).

The final is on August 5.