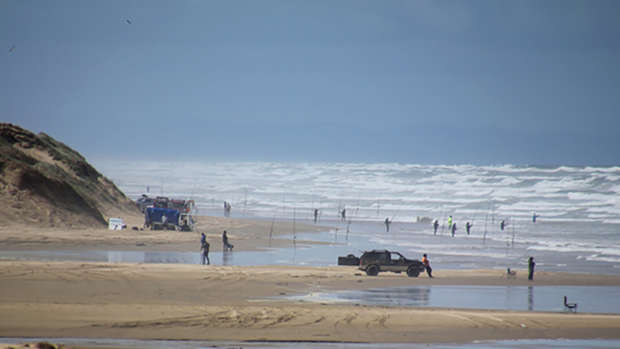 The Durapanel 90 Mile Beach Snapper Bonanza has cast off with the biggest turnout yet in the competition's seven-year history.

This year's event began on Tuesday in relatively mild conditions with a record 832 tickets sold to date, and the anglers fishing over a daunting 3.5m high tide off a waning full moon at 11am.

However, the fishing wasn't so good, with only 101 fish caught.

There was an improvement yesterdaywith 260 snapper weighed in after two fairly quiet days.

Snapper Bonanza co-organiser John Stewart said conditions today were fairly good for fishing after a change in the weather and conditions.

"I think the next couple of days we will be seeing a lot more fish caught," Mr Stewart said.

Mr Stewart said the fish will be auctioned at the Kaitaia Saturday Market, starting at 8.30am. All money raised from the sale will go to the Kaitaia Fire Brigade.

The heaviest snapper on Tuesday was reeled in by Izaak Crook, with the 5.95kg snapper earning the Hamilton angler a cool $2000 as day one's heaviest fish. It was Mr Crook's second year fishing the event.

He noted he did "not too bad" in what proved a prolific year for catching fish at the 2016 event.

"Came in with 18 snapper, biggest was 5.1kg" but never made the prize pool.

Mr Crook said he caught day one's winning fish "right by the boundary marker" using squid and anchovies as bait. He also voiced the general opinion the fishing was challenging.

The main prize for the heaviest snapper overall is worth $30,000.

"Not too much stress," he said, adding the forecast was in his favour to some extent.