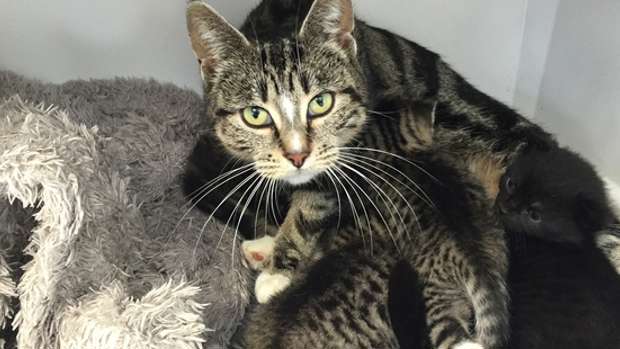 Mother cat reunited with her litter

A furry Whangarei family who were separated during a 24-hour ordeal have been reunited - at the start of the influx of abandoned pets over spring and summer.

An unusually strong maternal drive saw a tabby cat track her kittens to the Mill Road vet clinic, after they were dumped there last week. Vet Julie Wills said her team arrived at work on Wednesday find to a cardboard box on the doorstep containing four kittens, estimated to be 3-4 weeks old. "We took them in and got them all set up in the incubator. We all fell in love with them. We did have the option of taking them to the SPCA but decided because they were so adorable we were happy to look after them," Ms Wills said.

The kittens went home with one of the vet nurses overnight and were brought back to the clinic the next morning. It was then staff noticed a small tabby cat desperately trying to get through the front door. "Even when dogs came through the door this cat was trying to muscle its way through," said Ms Wells.

As soon as they picked up the cat, they realised she was a nursing mother and took her to the incubator. "She dived in there and was licking them and really excited to see them. Within minutes all the staff had abandoned their work and were watching." Ms Wells said presumably, the cat was dumped along with her kittens but was able to escape from the box. "She would have been hanging around the clinic working out how to get in for 24 hours."

A family member of one of the vets was now fostering the kittens, who would be ready to go to new homes in about four weeks. It was relatively rare for people to dump pets at the clinic without speaking to staff, with the SPCA bearing the brunt of abandonment, Ms Wells said. Whangarei SPCA manager Francine Shields said this year, the shelter "really hadn't stopped having kittens".

She said the cattery was sure to be at capacity over summer, though warm weather brought a variety of other challenges for inspectors including animals without water or shade, dogs locked in hot cars and a surge in stock calls because of drought.

She said the SPCA would appreciate any financial donations, and was also in need of puppy and kitten food. Visit whangareispca.co.nz.