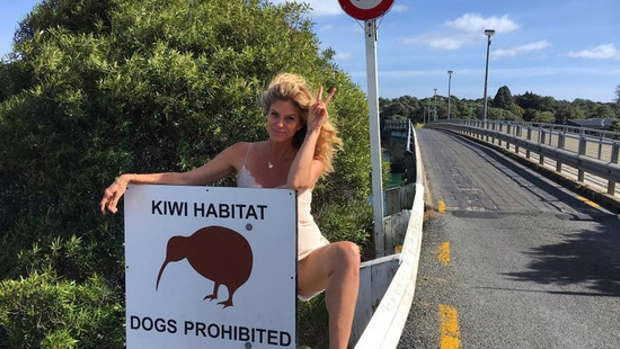 New Zealand supermodel Rachel Hunter has been visiting Northland and has shared a photo of herself on the Waitangi Bridge next to what she calls a "rare sighting" - a kiwi habitat sign.

The TV host shared the photo on social media on Sunday. Her visit to the Bay of Islands coincided with Air New Zealand's filming of a new safety video at Bay of Islands Airport in Kerikeri.

However, Air New Zealand has neither confirmed nor denied whether Hunter was among the "international stars" who feature in the safety video.

In response to the Northern Advocate's questions about Hunter appearing in the video a spokeswoman for Air New Zealand said:

"Good detective work! Guess Rachel must love Northland as much as we do."

When an Instagram user asked if she was in New Zealand, Hunter replied:

"Yes I am, till tomorrow back to LA. You would love where I am."