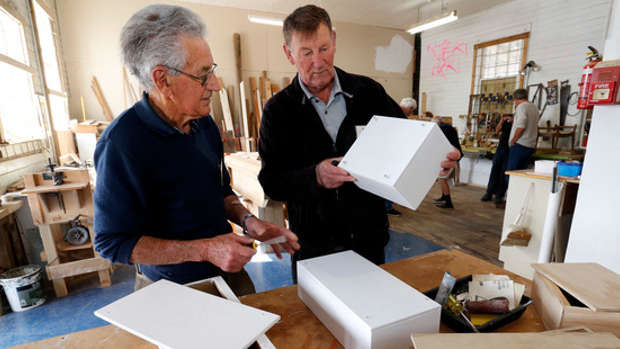 Volunteer hospital chaplain Jack Freeman has seen the distress of parents who have lost a baby.

So when he was approached about creating a casket for stillborn babies, he knew it was important.

Since last November Mr Freeman, Brian Ogle and the team from Whangarei Men's Shed have created about 40 caskets for the Whangarei Hospital Mortuary for stillborn babies.

The project began when Mr Ogle heard that not all stillborn babies were taken home in caskets.

"[The project] is most important. I have met with mums who are most distraught, so for their child to be put in something ... it doesn't help their grief but at least they know [their baby] is protected.

"It's not very nice ... I thought it needed to be something a bit more humane," Mr Ogle said.

"It was something I'd never thought about before. There's some really amazing men who come up with these initiatives. When you talk to them they come across as hard as nails but there is an emotional, sentimental and caring side you don't see all the time," said Mr Freeman.

Mr Matthews said being given the baby caskets was a "lovely gesture" from the Men's Shed.

"Often young grieving parents are not sure what to do so we offer them the casket and they can choose to use it or not," he said.

"We are really grateful to the guys at the Men's Shed for creating the caskets, for thinking of the babies and their parents in their time."

Mr Freeman said there were two sizes of caskets and 10 more were still to be made.

This week is Baby Loss Awareness week - a chance for families to come together and remember the lives of their babies who have died.

An event was held last Sunday by Sands Northland - a non-profit organisation set up to support parents and families who have experienced the death of a baby.