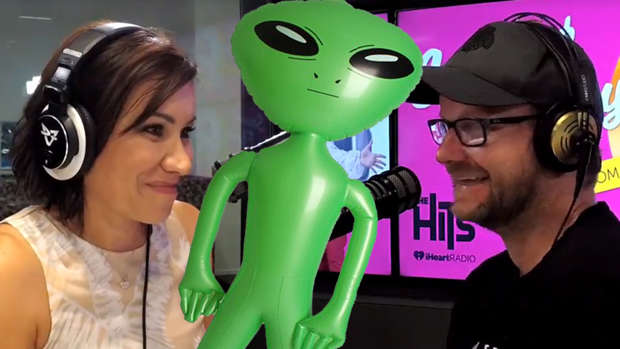 Summer is a popular time to pop the question, but it seems that 1 in 5 of those newly engaged women may actually be disappointed by their man’s proposal.

It turns out that Flynny’s wife could be one of those statistics after he revealed how he proposed: with an inflatable green alien holding a ring and a funny alien voice.

Stace decided to ask a few of the girls around the office if they would have been happy if their husbands and fiances had proposed in this way, and the answer was a resounding no.

And it seems many of you would agree.

In the comments on The Hits Facebook page, several shared their own insanely unromantic - and more than a little funny - engagement stories.

Here are some of the ones that we loved the most:

I still remember my proposal like it was yesterday. We were driving and I said to my man, "you know you haven't proposed yet aye". So he stops on the side of the road and says "so you want to get married or what?" We still laugh about it now and have been married for 24 years. - Kim

He was washing the dishes and I was sitting watching him. "So, do you wanna get married?" he asked matter-of-factly. ”Yeah, ok,” I answered. Not terribly romantic, that was 36 years ago. - Liz

My dad proposed to my mum at the KFC car park in Royal Oak. The romance of this man! Me, I’m good with him getting down on one knee. But knowing my luck he will probably throw the ring at my head and tell me I’m his forever. - Rachel

My husband proposed to me outside the ASB in Henderson in the carpark. We had been out for dinner and he was too nervous to do it in the restaurant. We have been married 27 years this year and no regrets. We still laugh about his chosen place to propose. - Anne

He asked me through a text and cause we had only been together for 2 months. I thought it was kind of a hike and said yes anyway. After 6 months of being together, we went to get a ring. We have been together nearly 8 years now and have been married for 2! - Karla

My hubby asked me to marry him then he mowed my lawns and went back to his house. - Rochelle

Can’t be disappointed because it does make for a good laugh since the moment he chose to ask was when I was changing our newest baby's poopy bum. - Louisa