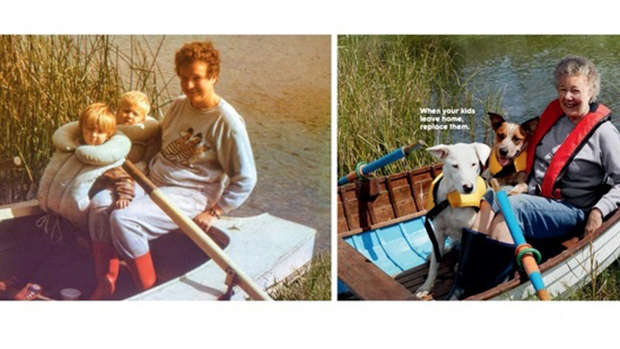 Have your children flown the coop? Does your home suddenly feel strangely and unbearably empty? Not to worry - just replace them with a furry doppelganger.

A new charitable initiative has launched to help rehome some of the thousands of dogs from around New Zealand rescued annually from abuse and neglect.

The campaign will bring together pet charities in a bid to have empty nesters "replace" their children with rescue dogs.

The campaign's interactive website helps match dogs with the physical characteristics of kids who have moved out, spokesman for the Pedigree Adoption Drive Trust Cormac van den Hoofdakker said.

"At this time of year, thousands of Kiwi parents will be feeling the effects of seeing their children leave home for the first time as they head to university or to start work," van den Hoofdakker said.

"There are also just as many rescue dogs in need of rehoming throughout New Zealand. We want to do all we can to bring them together."

Auckland psychologist Sara Chatwin said the impact of having an empty nest on mental health should not be underestimated.

Empty nest syndrome could manifest itself in a number of ways with some feeling depressed or anxious when there were fewer people in the home.

"Having spent much of their life looking after children and caring for them, parents can have difficulties coming to terms with a house that isn't so busy and frenetic," Chatwin said.

"All of a sudden their role as caregiver is significantly diminished and people can struggle with loneliness and depressive symptoms.

"They will often think long and hard about 'what next' to keep them physically and mentally active and getting a canine companion can help answer that question."

A new pet dog could allow the empty nester to shift the focus off themselves and their feelings of emptiness, she said.

Choosing a dog that has attributes of a child who has moved out could also have significant benefits.

"I suspect that if a dog embodies characteristics of a family member; long hair, a type of physique, it could really feel like a great fit in the family.

"Often people are looking for a replacement and are attracted to things they're used to (in regards to looks) or that remind them of certain people."

The campaign will run for a month and van den Hoofdakker said there was also a need for foster parents to help socialise the dogs that had been saved from abusive environments.

"For those that can't commit to taking a dog permanently, helping to socialise the dog through fostering it in a caring home is a key part in preparing it for long-term adoption."

Find out more
To find a dog replacement go to replacethem.co.nz.