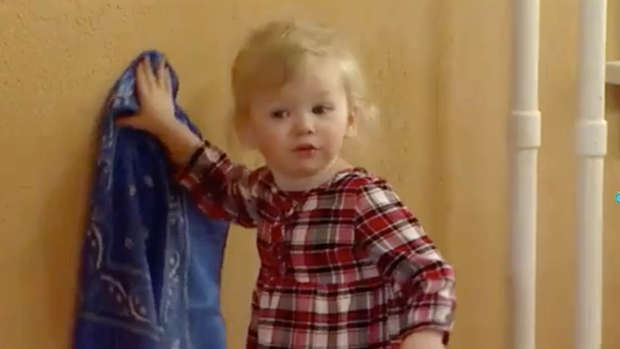 A toddler who is allergic to water breaks out in agonising blisters after just 15 seconds in the bath.

Ivy's mother Brittany Angerman, 27, who is trying to teach her daughter not to cry, worries about the youngster's future, including whether she will be bullied or miss out on fun opportunities.

Ms Angerman said: 'It's really hard, it breaks my heart, everything about it makes me upset.'

Although antihistamines help to control Ivy's incurable condition, her parents worry her body may stop reacting to them, with the only truly effective treatment being to avoid water entirely.

Ivy's family are speaking out to raise money towards the youngster's medical expenses, as well as to help them buy specialist medical equipment that may help ease her symptoms.

'I'm going to have to teach her to not cry'

Speaking of Ivy's diagnosis, mother-of-three Ms Angerman said: 'Ivy started getting a red rash and blisters while in the bath tub and we thought it was the shampoo or the soap.

'We tried everything and nothing changed, so we put her in water and she still got blisters.

'We tried our parents' water, we tried city water, countryside water and nothing changed.'

Since Ivy's diagnosis, her family have had to adapt to her condition.

Ms Angerman, a stay-at-home mother who has been married to Ivy's father Daniel, 31, for four years, added: 'We've got down to giving her one bath a week.

'Her skin looks like she's getting washed in bleach, I'm effectively washing my daughter in bleach.

'When we try to dry Ivy her blisters hurt a lot so we cannot use towels.

'When she sweats, the liquid brings her out in a bit of a rash and it goes red.'

'As a mother it makes me incredibly sad'

Ivy's agonising symptoms have also caused the youngster to develop a fear of water.

Ms Angerman said: 'Ivy used to love the water, she used to love playing about with the hose in the back yard in the summer, but now she's terrified of it and as a mother it makes me incredibly sad.'

She also worries Ivy's condition will cause her to miss out on opportunities available to her peers and two sisters, adding: 'she won't be able to go swimming or play in the park properly or anything like that, she's getting curious to go outside now.

'We surrounded by snow but we don't want her to go near it and let it set her allergies off.'

'I'm worried she will get bullied'

Ms Angerman also worries about how Ivy's condition may affect her when she is older, with many people not understanding the seriousness of the disorder.

She said: 'I'm concerned - what happens if one day a child at school decides to pour water over her?

'I'm worried she will get bullied or teased for it when she's older.'

'I'm constantly asked questions like "how can she be allergic to water when she's made of it?" but people don't understand that it can and has happened.'

Another concern is how Ivy's condition may progress.

Ms Angerman added: 'I was told by an allergist there's a woman who cannot drink anything but diet coke as she's become allergic to drinking water.

'We don't know if Ivy will ever get to that stage but she will be seeing an allergist every two months to monitor her.

'I have to document everything - when the rash comes up, what they look like, how long they last for - it's all got to be written down for the allergists.

'I do hope my other daughters don't get it, they've not shown any signs of getting it but it will kill me as a mother for them to get it too.'

'We take each day as it comes'

Despite their concerns, Ivy's parents remain positive that scientists may one day find a cure and their daughter will be able to live a normal life.

The family are hoping to fundraise $50,000 to help towards Ivy's treatment.

Ms Angerman said: 'We want to try and buy her a water purifier, which we hope could make the reaction less intense for her.

'Eventually we will think about moving somewhere that is not as wet too.

'It's very tough for the family but we will take each day as it comes and figure out how to do what is best for Ivy.'

WHAT IS AQUAGENIC URTICARIA?

• Aquagenic urticaria causes sufferers to break out in hives after their skin comes into contact with water.

• There are around 50 known sufferers worldwide.

• Women are more likely to experience symptoms, which typically start around puberty.

• The hives are usually red and 1-3mm across. They typically appear on the neck, chest and arms.

• Some may also experience itching.

• Once water is removed, the rash usually fades within 30-to-60 minutes.

• Aquagenic urticaria's cause is unclear but may be due to a substance in water that triggers an immune response.

• Most cases occur randomly with no family history of the disorder.

• Due to the condition's rarity, little is known about how best to treat it.

• Therpies typically include antihistamines, UV light treatments, steroids, creams that act as a barrier and bathing in sodium bicarbonate.