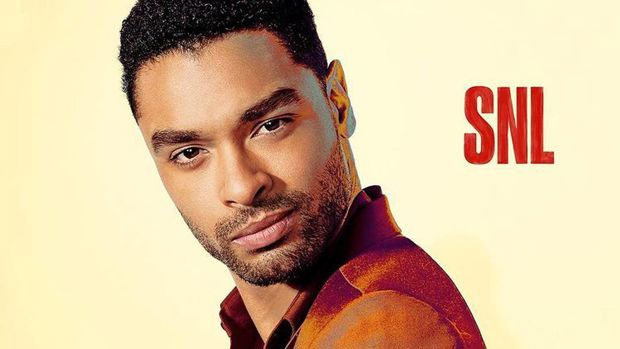 Having rocketed to obsession-level fame with his steamy portrayal of the Duke of Hastings on the Netflix series Bridgerton, Regé-Jean Page has shown he is more than just a pretty face when he hosted US comedy skit-show Saturday Night Live.

Making his SNL hosting debut this weekend, Page gave a tongue-in-cheek opening monologue during which he claimed to be just an "ordinary guy" who is also a bit "shy", before declaring his famous line "I burn for you" to the camera. He was soon joined on stage by SNL cast members Aidy Bryant, Ego Nwodim, and Chloe Fineman who seemed to be having trouble containing themselves around Page. The Bridgerton star declared himself to be a bit of a "nerd" who likes to sing "silly little songs", before being handed a microphone and delivering a pitch-perfect performance of the first few bars of romantic Righteous Brothers classic Unchained Melody.

One of the best SNL skits of the night was a song performed by cast member Ego Nwodim in which she fantasises about Page taking her home but he informs her that she is hallucinating, telling her in a seductive voice, "I just live in your brain." The track, titled Loco and also featuring Spanish language wrapper, Bad Bunny was so catchy it had fans crying out for an official track release, dubbing it "such a damn bop".

In a skit shared to Twitter with the caption "this is all of us when drivers license comes on", the male members of the SNL crew joined Page for some bro-time, hanging out and shooting some pool. Taking a moment to put Olivia Rodrigo's heartfelt track, Drivers Licence, on the jukebox - and sporting an American accent – Page defends his song choice and invites the other men to express their feelings through the track, which leads to a hilarious sing-along.

Once again showing off his singing ability, Page joined cast members including Ego and Bowen Yang for a gospel-themed tribute to food and 'G-0-D'. The upbeat take on traditional grace features some stand-out singing and a nod goes to Page for his impressively deadpan execution of some very interesting dance moves.