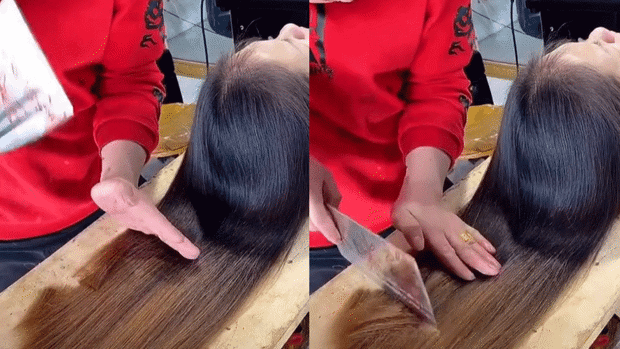 There is something truly distressing about getting a really bad haircut. Most of us can relate to that awful feeling when you walk out of the hair salon trying to hold back tears and wondering where you can buy a hat from ... fast.

When we sit down in the salon chair we like to know we are in good hands. We want to feel safe, looked after, and comfortable. A man holding a very, very large cleaver near our head is not normally part of the experience.

A recent TikTok post turned the very notion of settling down to get a hair trim completely on its head.

The short video, which has been viewed close to 10 thousand times, shows a woman with long dark hair, featuring some ombre highlights, leaning back with her locks spread out on a wooden table behind her. What happens next is so bizarre you won't be able to watch it just once.

A man, holding a large cleaver starts hacking away at the woman's hair. First, he takes a huge chunk off the hair length and then uses his terrifying large weapon to add some texture to the newly massacred hair ends.

The final frame of the video reveals the final effect, which is - of course- horrifying. The woman can be seen with what can only be described as a long mullet, with her top layer of hair now sitting significantly - and awkwardly - shorter than the rest of her long, straight locks.

TikTok users have had a field day commenting on the unorthodox salon session.

"Omg the result is horrible, I'll cry," remarked one user.

Other TikTokers saw the funny side with more than one posting: "Lol the results."

While most comments questioned the logic (or absence thereof) behind choosing a cleaver to perform the hair trim when a pair of scissors does a pretty good job.

"Don't they know there is a thing called scissors," one TikTok user queried, "... why would they pick the worst way when there is an easy one ... the results made it even worse."

The bizarre video was posted by @more.beauty, an account with more than two million followers that specialises in sharing unique beauty ideas and techniques. With videos on everything from making your own lipstick out of dragon fruit to some out-there nail designs and another hairstyling video that will make most people's blood run cold, the recent cleaver cut doesn't seem that surprising.