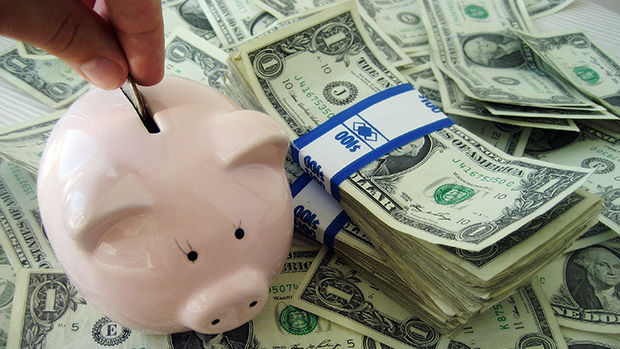 We all know the old saying "money talks" right? And here on The Hits 89.5fm, we're doing a lot of talking about money.

Every week we have $5000 up for grabs with the Alpha Quiz at 8am and also some lucky person will Live Free, whereby they win their entire rent or mortgage paid for one whole year!

At a time when renting or paying a mortgage takes such a huge chunk of your family's income, having that spare cash to save or do whatever you like with would be a dream come true.

So as I had money on my mind, I decided to sit down with my beloved Ben and actually take a serious look at our cash flow situation.

After much tapping of the calculator and huffing and puffing, it was concluded that there was indeed a cash flow situation, the situation being that it was all flowing out the window resulting in a serious cash shortage.

We were living well and truly beyond our means. I conceded that the fixed expenses could do with a tighten up, did I really need to have my photo and showreel on an Auckland based talent website and pay a fee for that each week when I had found the job of my dreams? Probably not.

Do we really need to donate to two separate gyms each week? No, no we don't. But the biggy, was the amount of money we spent feeding and hydrating ourselves for the past seven days.

To our credit, or debit as the case may be, it was a big week with lots of things on.

It was also incredibly hot so we were all incredibly thirsty, and as it turns out incredibly hungry. $586 worth of hungry actually!!

It almost beggars belief, but there it was in black and now red. A ridiculous amount of money spent with nothing more than a few extra kilos to show for it.

So our daily food allowance has been scaled right back in order to recoup some losses.

Ben has been banned from his bought coffees, sorry Switch, I'm bulking out dinners with the overgrown courgettes that have turned into marrows from the garden, and I'm raiding the fridge at work.

So far I've repurposed a box of stale Vita-Weats into a cheese toastie for lunch. And who said being frugal can't be fun!