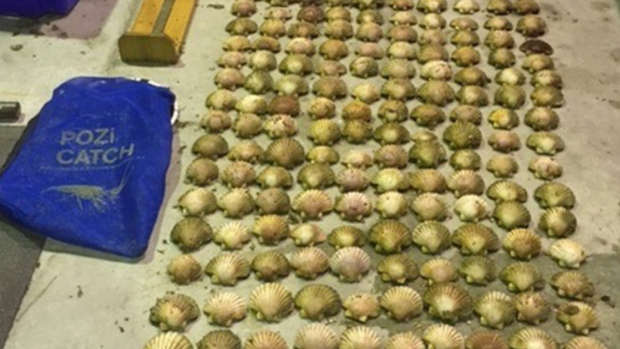 Vigilant members of the public are being praised for helping to uncover a haul of more than 300 illegally taken scallops by two divers in an incident at Whangarei Heads.

Ministry for Primary Industries spokesman Stephen Rudsdale said a member of the public contacted MPI last week to report that two scuba divers appeared to be taking a very large amount of scallops at a spot in Whangarei Heads.

"A fisheries officer went to the beach to check out the report and found one of the divers emerging from the water carrying a catch bag of 19 scallops," Rudsdale said.

"During the inspection, one of our officers was allegedly threatened by one of the divers. When they subsequently searched the area, they found 52 scallops dumped on the water's edge and a catch bag containing another 176 scallops in the water.

"Our officers took the men's details and informed them they would be facing charges under the Fisheries Act."

Later that evening, another member of the public reported to MPI that two men were acting suspiciously and apparently searching for something in the water in the same area.

The pair drove off towards Whangarei shortly after.

The men's vehicle was stopped later that evening by fisheries officers who immediately recognised them as being the same two they had dealt with earlier in the day, Rudsdale said.

"The officers found two dive catch bags containing a total of 318 scallops in the back of the vehicle.

"Unfortunately during the inspection one of the men, who was wearing gang insignia, became aggressive and threatened the officers.

Police were then called.

"The men had allegedly taken 565 scallops in total, over 300 of which were under the legal size of 100mm. The daily limit per diver is 20 scallops. This is extremely disappointing. What people need to remember is that this sort of excessive take threatens the sustainability of the scallop fishery and impacts the number of scallops available to other people.

"This was a premeditated, deliberate attempt to break the rules. MPI would like to thank the members of the public who reported the incidents. Their quick thinking has enabled us to take action."

The two men, aged 30 and 38, will both face charges under the Fisheries Act for possessing excess and undersized scallops and threatening and obstructing fisheries officers.

Their 1997 Toyota Camry station wagon and dive gear was seized.

Some of the scallops were returned to the sea. The scallops that had been out of the water for at least six hours were disposed of in case they posed a health risk.