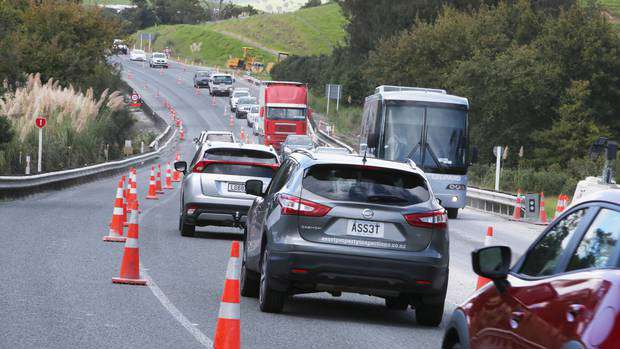 The berthing of two ships at Northport was delayed because the tugboat pilots were stuck in a slow-moving traffic queue caused by roadworks south of Whangarei.

The roadworks at Oakleigh were the source of frustration for many motorists on Friday night who reported their travel through the area was delayed by several hours.

The Northern Advocate Facebook page received plenty of feedback from motorists wanting to know what had caused the roading disruption and expressing concerns about traffic over the Easter weekend. Whangarei MP Dr Shane Reti said he was told two ships were unable to berth as scheduled because the tug pilots were stuck in the slow-moving traffic.

He said the delay for motorists was "not even close" to being acceptable and he was following up with NZ Transport Agency.

Northport would not be drawn on claims about the shipping delays. Instead, in a written statement, it was prepared to say only: "Northport is in discussion with NZTA about the roadworks."

NZTA was unable to comment yesterday on claims the tugboat pilots were stuck in the traffic.

Jacqui Hori-Hoult, of NZTA in Northland, said three sections of road over 1.2km were being rebuilt and resealed.

Traffic had to slow down to 50km/h for the roadworks site, which caused some congestion, before heavy rain compounded the situation on Friday.

"The downpour caused surface flooding and potholes in the road-work surfaces near Oakleigh from about 2pm," Hori-Hoult said.

"There was heavy evening traffic of commuters and holidaymakers travelling north in particular."

The traffic was forced to slow down even more to navigate the pot holes that had formed.

She said crews were on site with a grader to provide a smoother travelling surface, but decided to wait because the grader would have caused further traffic build-up.

Hori-Hoult said traffic was reduced by 7pm and the grader went to work.

She said the base layer of the road was to be stabilised tomorrow night, which would leave a tightly bound surface for Easter Weekend, before it would be sealed on Thursday.

The construction crew will not work over the Easter Weekend, but a 50km/h speed restriction will remain and crews will be available to respond to any adverse weather events.

"The only activity, if required, is keeping the surface damp to manage dust, and actively controlling traffic with positive traffic management. These activities can be done safely without holding up traffic."

One of those put out by the delays on Friday was Erina Kemp, who had to leave her van on the side of State Highway 1 and hitch a ride home to Whangarei with another motorist because she was running out of petrol.

Kemp said she left work in the cafeteria at Marsden Point at 4pm.

"I had quarter of a tank, which is normally heaps."

An hour after joining the queue on SH1, her petrol light came on. An hour after that she decided to stop near Totara Rd, about 3km south of the Oakleigh Gas station.

Kemp organised a ride with a stranger via Facebook.

"Within four minutes she was tooting out and I had to run down and hop in."

The woman, who was late for picking her kids up from after-school care, dropped Kemp at Whangarei i-site at 7pm where she was picked up by her partner.

At 10pm, Kemp and her partner got petrol, put it in the van and returned home to Morningside.

Senior Sergeant Ian Row said police did not have any special plans for the roadworks-affected area over Easter, but plenty of staff would be out and about across Northland.

This article was first published on the Northern Advocate and is republished here with permission.