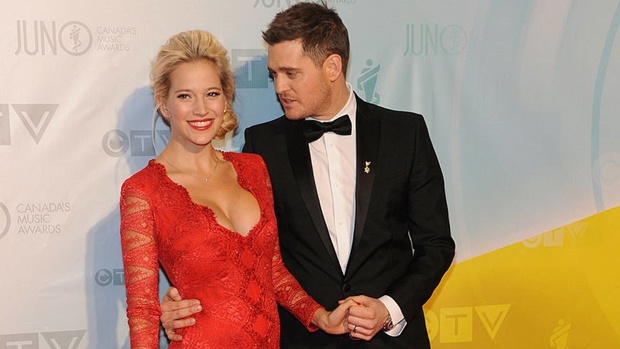 Michael Bublé has urged fans to help choose a name for his unborn baby.

The Feeling Good singer and his wife Luisana Lopilato - who already have Noah, eight, Elias, six, and three-year-old Vida together - are expecting their fourth child together but are having trouble agreeing a moniker that they both like.

Asked about the baby's name, he joked: "For a boy, I think Michaelito or Miguel. No, for a boy, I don't know, that's a tough one.

"I don't know. Come up, please, write me, go to my socials. Show up in my TikTok or my Instagram and help us pick a name, that would be nice."

The 46-year-old singer also revealed he has been left "broken" by his Higher music video and the training its director, dancer Derek Hough, and his girlfriend Hayley Erbert put him through before filming.

He told Entertainment Tonight: "They broke me. Hayley, his girlfriend, Hayley, who was my dance partner in the video.

"Seven days of rehearsal, lifting her, and she's a tiny thing, but lift her over and over again, and about two days in, I went like, 'Oh, Derek, my neck is a little bit sore.' And I could see he looked at me weird.

But Michael insisted it wasn't Derek's fault he got hurt.